Years ago, I met a very awesome lady named Carol. She was a Memphis transplant and quickly became part of our Memphis vegan community. I remember she greeted me in our first in-person meeting (we'd met online before) by gifting me hand-knitted potholders. So cool!

Carol eventually moved away for work, and now she lives in Wisconsin. But we've stayed connected through social media. Shortly after the pandemic started, Carol messaged me and asked if I'd like to receive a handwritten recipe for her Turmeric-Curry Mashed Potatoes in the mail. Um, of course I would!! The recipe arrived in the mail a week or so later, and it was like a little gift! Carol gave me permission to share this here on the blog. If you'd like to try the recipe yourself, you can click on the picture below, and it will expand into a more readable version. 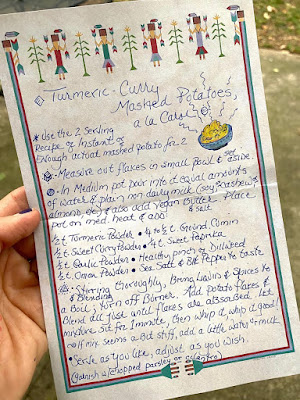 Carol could have just typed out a recipe, and I'd have been happy with that. But she took the time to write her recipe out by hand and even added a little illustration of a cute bowl of mashed potatoes. She's been making this recipe for 14 years! 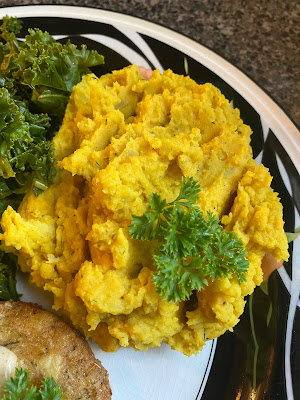 I finally got a chance to try these beautiful orange taters last Sunday as a side dish for some vegan crab cakes that I'll be reviewing soon. In Carol's recipe, she calls for potato flakes, which are a great pantry staple in times like these. But I'd stocked up on whole potatoes a few weeks before, so I used fresh potato instead. These were creamy and loaded with curry spice, so they have an Indian flair. A really yummy alternative to plain old white taters!

Carol says this recipe works great for any tuber, and I'd bet sweet potatoes would work especially well. Enjoy!!
Posted by Bianca at 9:00 PM

They look beautiful! I bet they'd be good with some peas thrown in, kins of like samosa mashed potatoes!
The handwritten recipe is the best!!!

Your pic of them really looks delicious, perfect with the "crab" cakes.
Thanks for posting it, I feel like a vegan celeb!

I just realized - I forgot to add the phrase at the beginning of the 2nd step for the liquids and vegan butter - "According to directions on the box of taters..." Sorry. But, hey, you figured it out anyway!