Last Tuesday, I took part in a socially distanced animal rights demonstration with the Physicians Committee for Responsible Medicine. They have a nationwide campaign going to raise awareness about the terrible conditions for workers in meat processing plans in relation to COVID-19. Years ago, my friend Vaughan and I ran a little Memphis-based animal rights group, and we held rallies and leaflet events several times a month. But we both moved more into the vegan meetup world and started organizing social gatherings for vegans instead rallies. Vaughan still has contacts at PCRM though, and they asked us to put a quick demo together. 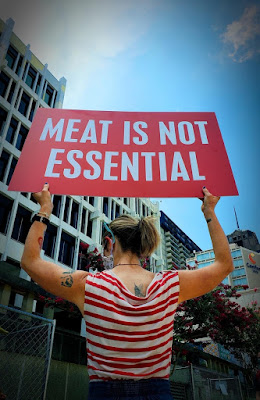 Nicole, an awesome vegan activist who brought her whole family (she has 4 kids) to the demo, took this awesome photo!

We stood on Front Street downtown near Adams (in front of City Hall), and while there wasn't as much traffic as there would have been pre-COVID, we still had plenty of cars pass by. A number of city employees passed us on the sidewalk, and we were overwhelmed by how many offered words of support. One guy saw my "Meat Is Not Essential" sign and said "You're right! It's not!" I know we've got a long way to go, but I really do see the country moving in a more vegan direction. I'm hoping the meat shortages will further help people see that they really don't need meat. 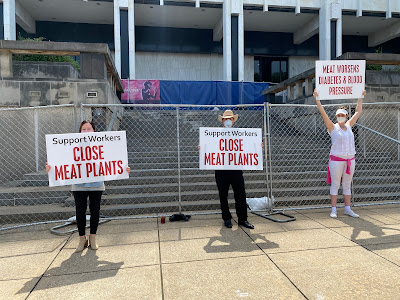 Now onto the food! I'm still sticking with my weekly meal themes. Monday is still Macaroni Monday, which means I eat some kind of pasta dish. Last week, that was Pasta Marinara with Bean Balls from the No Meat Athlete Cookbook. The balls are made with white beans, hence their light color, and they were really tasty. 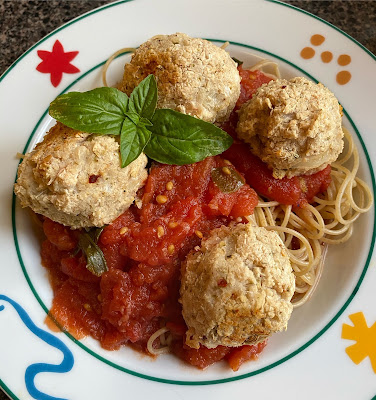 Tuesday is Taco Tuesday, but I count anything in a tortilla. Last Tuesday, that was an Olive Quesadilla from Crazy Sexy Diet. I pulled this book off the shelf in my ongoing effort to cook something from every cookbook I have. This yummy 'dilla has Daiya cheese, kalamatas, roasted red peppers, caramelized onion, and spinach. 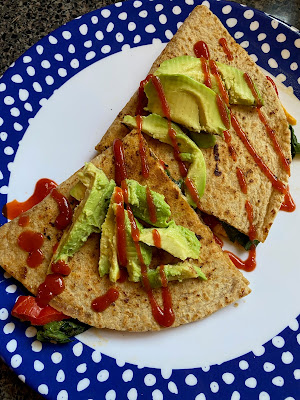 Wednesday is Wok Wednesday, so I focus on stir-fries, ramen, noodle dishes, anything I can eat with chopsticks! Last week, I made a Soy Curl Stir-fry with chicken-seasoned Soy Curls, broccoli, and bell pepper (seasoned with hoison) over brown rice. 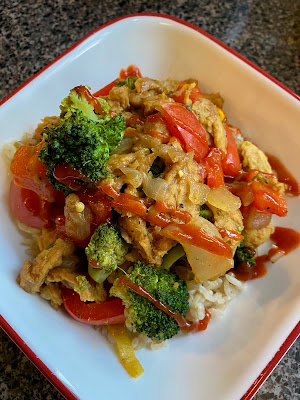 The quesadilla sounds delicious! I would have never thought to use Kalamata olives!
I agree, it isn't happening fast enough, but we are slowly inching towards a more vegan world!

That's great that you were able to organise a protest, and that you had a good response from the public. The trauma and risks that workers at abattoirs go through are atrocious.
I too am going to be pulling out Crazy Sexy Diet soon to make some things from it as I work my way through the alphabet of my cookbooks, cooking from them all. And epically slow process! But a fun one.