Summer Solstice was this weekend! Summer is my favorite season. Even though it's been ages since I've been in school and experienced the magic of a real summer off, that excitement for the season never left me. I love hot weather, outdoorsy activities, tank tops and short shorts. I love juicy summer tomatoes and sweet, sticky watermelon. I love pools and beaches and anything involving bodies of water.

Solstice technically began on June 20 (Saturday), and it ran through June 21 (Sunday). So, of course I made it a two-day celebration! Early Saturday morning, Paul and I drove to Moscow, Tennessee, (about an hour from Memphis) to kayak the Ghost River. Last summer, we canoed this swampy river for the first time and swore we'd never do it again. It was so hard in a canoe! But kayaks are much easier to navigate with, so we thought we'd give it another try. 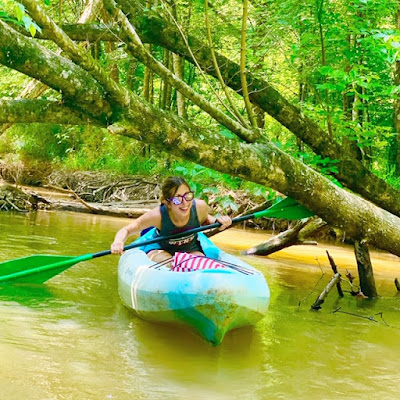 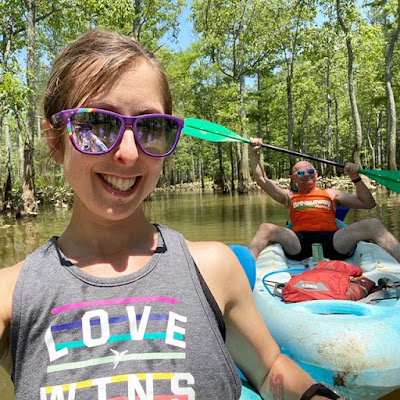 It was sooooo much better in a kayak. Light-years better. There are so many twisty turns and narrow passages. We met our friend Kevin there, and the three of us stuck together during the six-hour kayak trip. We stopped on a sandbar mid-way through for lunch. I packed vegan black forest ham sandwiches (made with Simple Truth deli meats), Chao cheese, Veganaise, avocado, and tomato. Here I am with a half-eaten sammich! 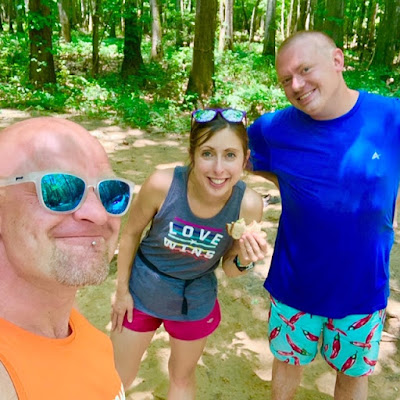 After the trip, we were exhausted. But Paul had just bought us a new gas grill the night before, and we needed to break it in. Luckily, with a gas grill, that just means turning a knob! I broke in the new grill with a Beyond Brat (topped with chow chow and dijon). 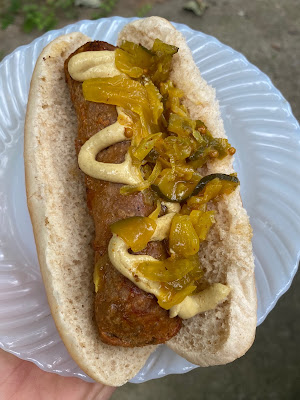 The next day was not only Litha (Summer Solstice) but also a new moon! And Father's Day! I spent Friday with my parents for an early Father's Day, and I'll blog about that tomorrow. But on Sunday, Paul went back to Nashville for work (after we got in a 5-mile run), so I made a big New Moon/Litha feast for one.

I started with some fresh Raspberry Lemonade made with muddled raspberries, lemon juice, sugar, and sparkling water. Perfect refreshment while I fired up the grill. 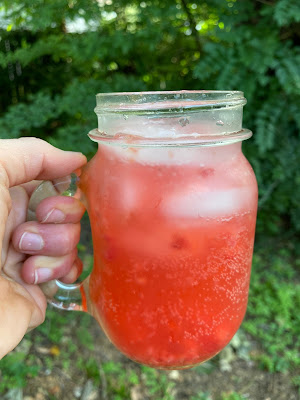 For my starter, I made Salad on a Stick from the 2020 Sabbats Almanac (that's also where I got the lemonade recipe). The recipe called for feta or mozz, but I made tofu feta for these cute little kabobs! 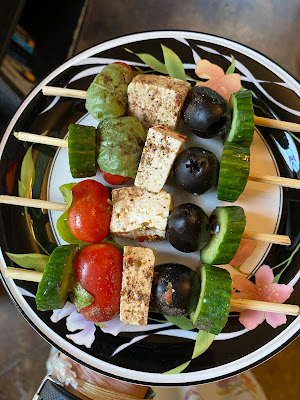 My dad had sent me home with some smoked tofu on Friday, so I coated that in BBQ sauce and fired up the grill. I also made fresh pesto from my basil plant and coated some veggies (squash, zucchini, and eggplant) for the grill. Our pepper plants are starting to produce some peppers, and I was able to throw a few banana peppers on the grill too. I used the grill's side burner to make a pot of quinoa. 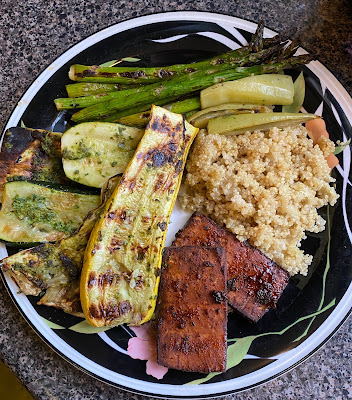 To serve, I set the real dinner table (not my little kitchen two-seater, where I usually eat) with a placemat and all my utensils! I used the hand-me-down plates my mom gave me. These were her "good dishes" in the 1990s, and I love how retro '90s they are. 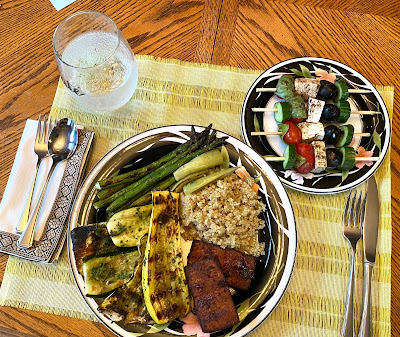 That raspberry lemonade sounds incredible, I definitely need to make that!!
You are so lucky your dad makes smoked tofu for you!!
All those grilled veggies look delicious, and I love the idea of salad on a stick!!
Love the retro plates too!!

Happy Litha! I am glad the kayaking was a more fun way to spend the day, I remember your tales of horror from the canoes. We just had Yule here, which I observed by making a very cosy dinner I am going to be posting about soon.