This Is My Jam

Okay, technically, this is my fruit spread. But that doesn't have the same ring to it. What am I talking about? Italian-imported Fiordifrutta fruit spreads by Rigoni di Asiago!

A little while ago, I got an email from a PR rep from Rigoni di Asiago asking if I'd like to review the company's chocolate hazelnut spread. I got all excited until I googled and realized it wasn't vegan. So I wrote an email back politely declining. But the PR rep responded by telling me that she'd be happy to send over some of Rigoni di Asiago's vegan, organic fruit spreads instead. Well, yes! 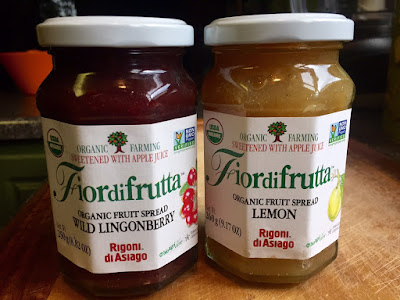 I got to pick two flavors from their long list of all-natural fruit spreads. I went with Wild Lingonberry (because I'd never heard of a lingonberry, so it sounded intriguing) and Lemon (because I love all things lemon!).

Each jar contains more than THREE POUNDS of organic, non-gmo fruit sweetened with apple juice and thickened with pectin. And that's it. Only three ingredients! Now that's about as unprocessed as it gets, folks. The spreads are also lower in calories than most jams and jellies because of the natural sweetener. Most jams are around 50 calories per tablespoon, but these range from 30 to 40 calories.

You can do all kinds of things with fruit spread — add it to coconut yogurt, use it as a muffin filling, top your pancakes with it, even blend it into smoothies. But I'm old-fashioned. I like my fruit spread on toast. I tried the Lemon Fiordifrutta spread on a slice of vegan-buttered sprouted grain toast with a side of tofu scramble. It has a nice lemony tang, but the sweetness from the apple juice offsets that so that it's not too tart. The perfect combo. 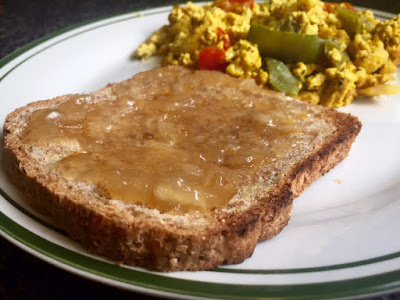 I didn't know what to expect from the Lingonberry Fiordifrutta spead since I'd never had a lingonberry. A little googling quickly revealed that lingonberry jam is a staple food in Scandinavian cuisine. Neat! The fruit spread has a tart and sweet flavor that's reminiscent of cranberries. Seemed like the perfect thing to pair with almond butter on cinnamon raisin sprouted grain toast! 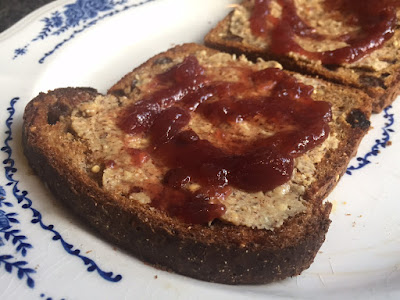 These fruit spreads are fantastic. I'd love to try some other flavors eventually. They have apricot, peach, wild blueberries, cherry, Seville orange, fig, pink grapefruit, and more! I looked up where to buy it, and it's available all over the place — Amazon, VitaCost, even Walmart. So from now on, this will be my jam. Or my fruit spread. Whatever.
Posted by Bianca at 10:13 PM

If you're looking for trying something new, lingonberry jam goes great with these - http://mammituokkonen.blogspot.se/2009/03/cabbage-rolls-kaalikaaryleet.html?m=0
And I really like lingon jam with (veggie) meatballs and potatoes, just like a certain Swedish furniture store!

You inspired me to do up some jam this week!

Oooh, lemon! Ya, jam in yogurt is one of my favorite hot weather snacks/desserts