When I first heard that Daiya was introducing solid block cheeses, I was pretty much beside myself with joy. I already have Daiya shreds running through my veins because I eat so much of it, but the shreds are kinda messy when, say, topping a veggie burger or melting a grilled cheese. Unfortunately, it takes aeons for our Memphis Whole Foods to pick up new products, so there was only one way to obtain my very own Daiya wedges — Vegan Essentials!

Luckily, it's about Easter time, and my parents still give me an Easter basket (yes, I'm 31, and I still get an Easter basket ... yes, I have no shame ... no, I don't even really celebrate Easter). It's always stocked with hard-to-find vegan goodies that my dad picks out from Vegan Essentials and accidentally vegan Easter candy that my mom scours around for in regular stores. So I asked my daddy if he'd include some Daiya Wedges. Look, there they are! 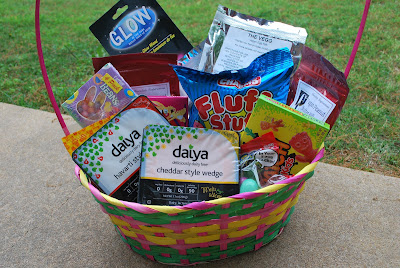 Also included were Peanut Butter Pillows from Chocolate Inspirations, Inc (they're just like vegan Butterfingers!), a few more packages of Vegg powder, and lots of traditional Easter candy that just so happens to be vegan (like Skittles, Sour Patch Kids, and cotton candy). And a fairy glow stick wand (because I'm really just a big ol' kid).

But back to the subject of this post — Daiya Wedges! They make three flavors — Cheddar, Jack Style, and Jalapeno Garlic Havarti. I received the Havarti and the Cheddar, and since the Harvarti is a new flavor for Daiya, I opened that one first: 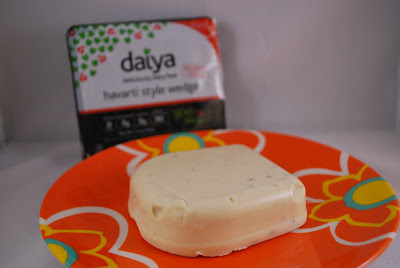 What to do with it though? First, I decided to go the traditional block cheese route and slice it up for cheese and crackers. I served that with a snacky plate dinner of crudites with garlic hummus and some Pea Hummus from the Happy Herbivore 2012 calendar (peas blended with nooch, garlic, and vegan mayo). 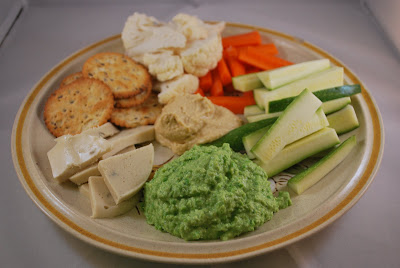 You can't have cheese and crackers without wine! To celebrate this joyous cheesy occasion, I opened a 2005 bottle of some fancy-looking French wine (may not actually be French, but it looks French to me) that I got for my birthday: 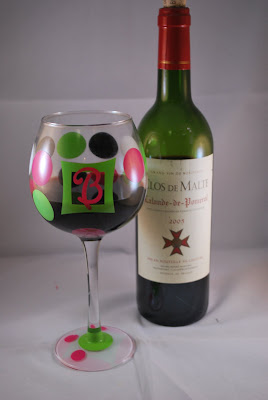 The verdict? I love the slighty spicy, super garlicky flavor of this cheese (especially paired with the smoky red wine)! And while it was delicious sliced on crackers, it was a little too soft for that.

So I tried melting some over a bagel for breakfast. Then I topped that bagel with sauteed oyster mushrooms (that I grew myself!) and vegan sausage: 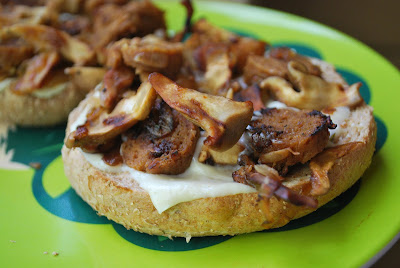 Holy crap, y'all. This harvarti was MADE to be melted. I should have known since meltability is Daiya's strong point. It improved the texture and flavor about tenfold. And this may have been the most satisfying breakfast I've had in a while.

I've not yet tried the Cheddar, but I'm pretty sure I know what I'll make with it first. Can you guess? I'll give you a hint. It starts with a "g" and rhymes "spilled peas."
Posted by Bianca at 11:40 PM

I got really lucky and Daiya sent me home from the Natural Products Expo West with 12 packs EACH of the cheddar and Havarti wedges. I've given 1/2 of them to friends and was grateful for the opportunity to share! I haven't opened any of the packages, but I did sample all 3 flavors at the Expo and really liked the Havarti. The flavor is really good. I'm looking forward to making some grilled cheese with the various flavors, too! Enjoy!

Wait...can your parents start consulting my parents on what to buy as gifts? I'm pretty sure this beats the flannel sheets I got for Christmas.

wow, great review! it's good to know they are made to be melted rather than the traditional cheese with crackers.

I love the wedges a lot. The havarti and cheddar were both hits with me. I love having a cheese and crackers option again.

one day daiya will arrive in australia and i will DIE

Yesssssss! Finally a review of this much-anticipated and magical product, and I'm glad it was by you. So excited to try it, the havarti style sounds magnificent...

OMG your dad is awesome!! That looks like the perfect Easter basket and a great idea that I may have to steal if anyone ever asks me what I want for a gift (can you make wishlists on Vegan Essentials? ;)

The Peanut Butter Pillows sound awesome and I am so excited to see the new Daiya put to work! The idea of it is very exciting and I too am excited about the possibility of cheese and crackers! Thanks for the review, I'll have to make sure I check WFs for it!

I'm jealous of your Easter basket every year! I wish they were a thing here.

Just saw them yesterday!!! I found them at our local 'green' store, so they were $6 each (eesh). I thought about them all night, haha, wrestling with the idea of spending that much on fake cheese.. But now, it's on! Thanks for the review, perfect timing :).

Awesome! I can't wait to try these! Those havarti wedges sound amazing! You know, I'd be fine with it if your parents wanted to start sending me some vegan Easter baskets. hahaha!

Haven't had the Havarti yet, as my Whole Foods was out of it, but I have tried the Jack. I would like it if they toned down the lemony-ness, but it really is close to a semi-soft jack cheese. Cheddar is my least favorite Daiya, so I haven't tried it yet, but will this week (I realize all of these cheeses are works in progress, so I will never dismiss them out-of-hand. Props to the folks at Daiya who are leading the charge!) And I will look for the Havarti again, as that's what I really wanted to try!

Jalapeno Garlic Havarti sounds like some good stuff. Nice looking basket. I'll be on the look out for the block now.

Getting hungry looking at those photos.

Love the blocks too & my fave is the Havarti. Try slicing & wrapping in a slice of Yves or other vegan phoney baloney-yum! Or use same ingredients as a sandwich.Like them more that the shredded.