Well, folks, someone's done gone and invented vegan egg yolk. We really do have it all now (well, except for vegan ranch tortilla chips ... someone please invent those!). The Vegg, a powder that, when blended with water, becomes the same exact consistency as a runny egg yolk, may be the best vegan product of 2012!

The powder is made from nutritional yeast, sodium alginate, black salt, and beta cartone. It was co-created by Rocky Shepheard, who's been working on perfecting vegan egg yolk for years. In 2009, Rocky emailed me his recipe for vegan egg yolk and I posted about it here. That recipe was delicious, but it wasn't quite spot-on for texture. Now, it's perfect! I doubt an omni would be able to tell the difference. Here's what the yolk looks like after the powder is blended with water: 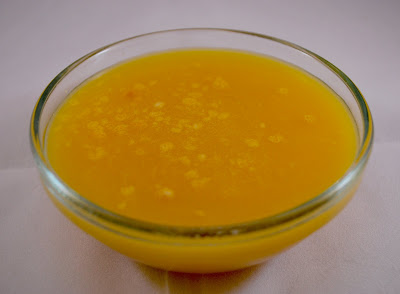 The Vegg folks sent me a free sample, so I tried it using a couple of the recipes on The Vegg's website. First, I tried the Vegg Tofu Scramble with Veggie Bacon: 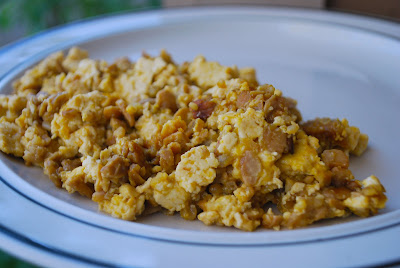 Basically, you make a tofu scramble as you normally would. I added my homemade tempeh bacon too. And then you pour the Vegg yolk over the scramble and let it cook up like scrambled eggs. It really adds that real egg taste and texture to your scramble!

This morning, I made Vegg French Toast: 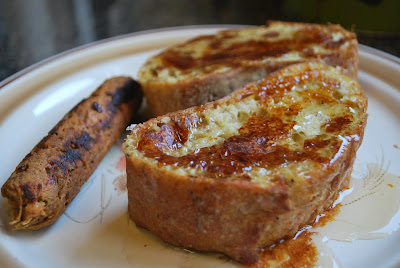 Look at the crispy bits on that toast! The Vegg yolk is mixed with soymilk and the bread is dipped and fried. The yolk fries up exactly like real egg yolk in a French toast batter. It tastes more like traditional French toast than any vegan recipe I've ever tried.

Other recipes on the Vegg website include a frittata, egg noodles, hollandaise sauce, custard, caesar salad, and even cake! Yes, you can substitute Vegg yolk for egg yolks in cake recipes! And unlike Ener-G, this stuff actually tastes like eggs!

The best part? 10% of all sales are donated to Compassion Over Killing! You can order The Vegg at most major vegan online shops, like Vegan Essentials and Food Fight Grocery.

By the way, I won't be posting again until Sunday night. I'm spending the next few days at the Farm in Summertown helping out with the photo shoot for my cookbook. Yea!!!!!!!
Posted by Bianca at 11:28 PM

Wow, what will they think of next? And you can make custard with it? Are we talking flan here? Mind= blown!

woo hoo - i was waiting for someone to review this before i bought it off vegan essentials. sounds good - excited to try!

I've been making a lot of Korean dishes lately, and a lot of them call for a broken egg on top, and so I've just been skipping that... but now I wont have to!

WHOA! I agree with T - mind blown!! I am so excited about this! Can't wait to try it!

Wow, I'm impressed! I can't wait for it to be available in Canada.

This is easily the best thing I've heard all week. Or month. Definitely going to have to make a special online order for this one!

Is it me or is there a sudden influx of creative and amazing new vegan products out there? I'm so excited to try this! That scramble looks so eerily tempting...

Have fun on your photo shoot! :D The big day is closer & closer!

I don't want to want this stuff, but posts like yours have me growing ever so curious.

hey girl - i have your vegan ranch tortilla strips! we recently saw someone post and say these chips tasted just like ranch ones, and while it is a toned-down ranch, it is like ranch doritos...whoa, mama! hot damn! i didn't think the day would come. find tostitos garlic and black bean chips - fancy bag --- they don't taste like garlic and black bean, they taste ranchy. you will love them! also, thanks for all of your posts. :) i am loving the blog. :) vegan for almost 7 years now and still love finding new recipes...yours take the cake! xoxo dani

My initial thought was "gross..." but you won me over with that French Toast!!

This is pretty awesome. Hope the photo shoot goes well.

Uuuuuuuum yeah I just placed my order :) And naturally I couldn't just order a pouch of vegan egg yolks and justify the shipping so I had to order gluten free cookies too. Oops! ;) Thanks for this post I'm so excited to make my tofu scramble!

Question, I noticed you have to mix up the whole pouch at a time? How do you store what you don't use? Will it include that in the instructions? Thanks!

French toast looks AMAZING... one of my favorite breakfast foods!

I have the same Q as xvavaveganx did you mix the whole package up at once? How long do you think it will keep in the fridge if it is all mixed?

I was thinking today about how I would miss French Toast once I go vegan...and now I won't! Yay!

Hey Vava Vegan and Heather! You don't have to mix the whole Vegg pack at once. One teaspoon plus one cup of water equals one egg. You can just use a little bit at a time.

And Vegan Danielle, OMG!!! Thanks for the tip. I will definitely be trying those chips!

Wow! Now I've got to try the new vegan butter recipe and THIS. Can't wait.

Is this more for flavor or would it be able to provide the consistency for omelettes, etc?

It sounds so cool, but I think I may have forgotten what eggs tasted like! I'm not sure how I'll like it!

This is SO COOL, the scramble and french toast look spot on!

Why did they have to add phenylalanine to this? I'm not convinced about the healthy nature of a lot of these products. And I managed a health food store.