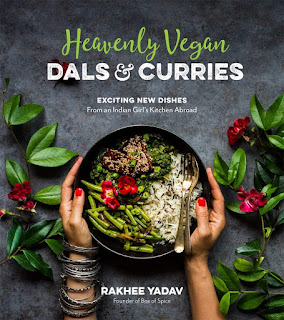 I love Indian food! In fact, long story, but it was Indian food (and an Indian family) that influenced me to go vegetarian as a 14-year-old in 1994. But I don't eat authentic Indian food nearly often enough. My favorite Indian food in Memphis is served at South Indian restaurants WAY out east, at least a 30-minute drive from my house.

It's much more convenient for me to just make it at home. And that just got easier thanks to Heavenly Vegan Dals and Curries by Rakhee Yadav. This new colorful vegan cookbook features both traditional dishes and plenty of fusion cuisine that adds Mexican, Mediterranean, and American flair.

The book is divided into four chapters — Meatless Wonders, Vegan Power Bowls, Plant-Based Delights, and Wholesome Snacking. As much as I wanted to try everything, I settled on one recipe to try first — Spicy Green Peas, Potato, and Bell Pepper Curry. 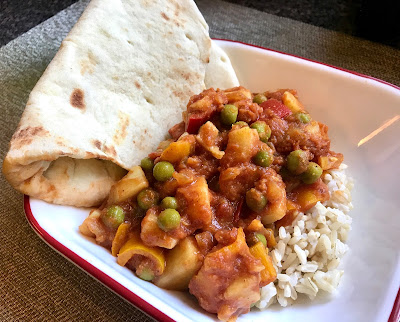 I'm not typically one to pick a main dish that doesn't contain a legume or bean or some sort of significant protein. But this veggie-based dish called to me! Peas, potatoes, and peppers are cooked in a spicy tomato-based sauce seasoned with toasted spices, like coriander, cardamom, cumin, and clove. Served over brown basmati with a side of vegan naan (from the Sprouts bakery), I didn't even miss the protein. Of course, all veggies have protein, but this dish was still very filling without legumes.

There are plenty of legume-based dishes though, and I'll have to try one soon. The Toor Dal Carrot Turmeric Soup (with split pigeon peas) and the Red Masoor Dal (with red lentils) are both on my list.

Yadev gets super-creative with her dishes, infusing them with bits of other food cultures. There's a Dal Minestrone with chickpeas, kidney beans, brown lentils, and plenty of herbs and veggies. Or the Baked Sweet Potato Stuffed with Chana Masala Lentils and Cashew Cream. Or — my fave — the Naan Tacos with Green Pea Amaranth Falafels and Spicy Avocado Chutney.

The snack section goes global with Puy Lentils & Avocado Hummus and Split Green Pea Pizza but also includes more traditional Indian snacks (better known as chaat), like the Crunchy Lentils (soaked legumes that are then deep-fried and served with onion).

Most of the recipes require several steps, so I wouldn't call this a "quick and easy" cookbook, but it's perfect for a weekend night when you have more time to lovingly prepare a meal.
Posted by Bianca at 9:00 PM

Your dish is beautiful and I looks so tasty!! This looks like my kind of cookbook!!!