The Beyond Burger at Huey's in Memphis!

For years, Memphis burger joint Huey's has won the Memphis Flyer's Best Burger award in their annual Best of Memphis readers' poll. It's a beloved homegrown place with nine locations all over the city (and even in North Mississippi). I've been going there for their veggie burger for as long as I've lived in Memphis. It's a veggie-based patty.  It's vegan. And it's really, really good!

But Huey's stepped up their vegan game recently with the addition of the Beyond Meat Beyond Burger, Follow Your Heart vegan smoked gouda, and vegan mayo! To celebrate, we had our Memphis Vegan Drinks meet-up at the Midtown location last night. 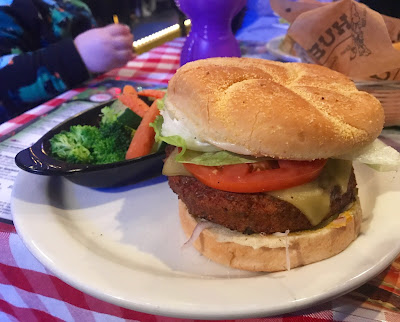 For vegans, burgers are served with your choice of steak fries, tots, sweet potato fries, or steamed veggies. Typically, I'd go with tots ALL DAY. But as I mentioned in last night's post, I need to get back on my whole foods game this week. I figured the Beyond Burger and white bun was enough of a treat, so I ordered the veggies on the side. But I did have a High Cotton Scottish Ale with my burger (pints are only $3.50 during happy hour!).

You can order the Beyond Burger or the regular char-grilled veggie burger in all kinds of ways. I opted for the way it came on the menu (kaiser bun, onion, lettuce, tomato, vegan gouda, and vegan mayo). But you can also go with the West Coast burger (whole wheat bun, guac, just sub vegan cheese and mayo) or the Texas Toast Burger (thick white toast, sauteed mushrooms and onions, just sub vegan cheese and ask them to prepare the mushrooms/onions in oil instead of butter).

Note: The black bean patty at Huey's is NOT VEGAN. It contains eggs, so it's safe for vegetarians but not vegans.

The coolest thing about Huey's adding more vegan options is the accessibility factor. Since Huey's has locations in certain areas of the suburbs where vegan options aren't as available, more people will have access to meat-free burgers. Yay!
Posted by Bianca at 9:00 PM

I have some friends that live in Memphis and they talk about going to Huey's all the time! That's so funny because they aren't vegan but I just know the name and how beloved that place is! That is amazing that they stepped up their game, the burger looks delicious!

Whoah!! That’s so awesome they have TWO vegan options and a vegetarian one! I would totally go for the one topped with sautéed mushrooms.... the veggies with the burger are the best of both worlds, sometimes a veg burger with fries eating out is too heavy for me since of course i finish everything.
Hopefully more and more restaurants will continue to add vegan options! Heck, I’m great full that “vegan” is becoming part of the common vocabulary even if it is often not understood correctly
Ttrockwood

I'm so excited that so many restaurants are embracing the Beyond burger!! I keep hearing great feedback even from non vegans!!

It seems like there are many "junk food" options for vegans over there! Most places up here keep the vegan options lighter or sans faux. So I am a little jealous of the fake cheese.