Back in September, I left my long-time position as a reporter/editor at the Memphis Flyer for a position in communications for Crosstown Arts, a nonprofit arts organization in my neighborhood that, for the past several years, has been leading an effort to transform the massive, former Sears Crosstown building into Crosstown Concourse, a "vertical urban village" of arts, healthcare, and education organizations, apartments, restaurants, and retail.

The former Sears building, which once served as the regional HQ for the retailer, was a 1.5 million-square-foot blighted, vacant structure. Construction on the revitalization of this 1920s art-deco style building has been underway for a couple years now, and finally, a few places are opening their doors. Last week, the Curb Market opened in the retail area on the bottom floor of this 10-story building, and I was blown away by how vegan-friendly it is! 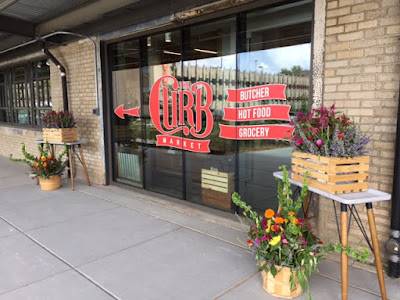 Curb Market originally opened in Cooper-Young a few years back, but that location closed and moved into Crosstown Concourse. The premise has always been focused on local produce and food products, but this new store is much bigger than the former location. And since it's the only grocery in the building, which, once completed, will host 3,000 people daily (employees, residents of apartments, visitors), Curb added some non-local, frozen foods and pantry staples to make things easier on people looking for a one-stop shop. 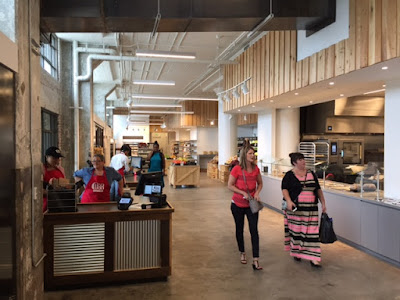 Here's a little tour of some of the vegan goodies I've found! The prices at Curb are slightly higher than a regular grocery store since it's a small boutique grocery, but for anyone who works or lives in the building (or lives down the block, like me!), it will be worth the extra price for the convenience of not having to drive to the Kroger down the street. Plus, Curb has some vegan items that Kroger doesn't carry.

Before we get to the vegan convenience things I found, check out this gorgeous produce. They get as much local produce as they can. I'll never have to go downtown to the farmer's market again! 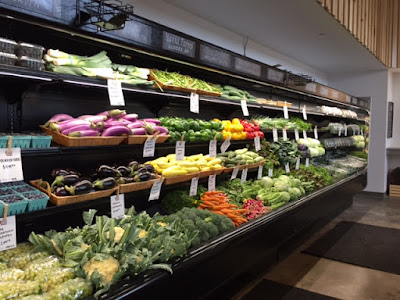 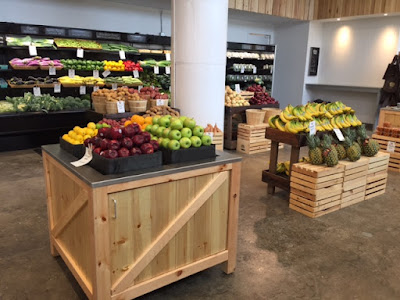 They also carry lots of locally made foods, like my very favorite thing, Dave's Bagels (all of which are vegan except chocolate chip). You can also get fresh, toasted Dave's Bagels at breakfast at the Curb deli. 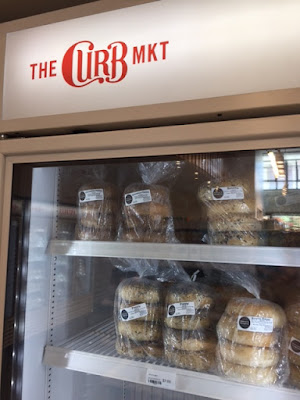 They carry Sweet Magnolia Gelato from Clarksdale, Mississippi, and they have a few flavors of sorbet, which are vegan. I bought this Watermelon Cucumber Tomato Sorbet last week. So good! Nice, refreshing watermelon flavor with just a hint of juicy, summer tomato and cooling cucumber. 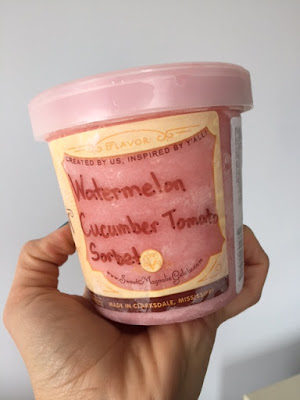 They carry locally made Grecian Gourmet Pita Chips and hummus. Pictured here are just the chips (with Sabra hummus cause that's what I already had at home). I bought the chips yesterday, and they ARE SO GOOD. They're seasoned with an awesome spice blend that tastes like Cavender's Greek Seasoning (maybe it is?). Best pita chips I've ever had. Will be buying these often. 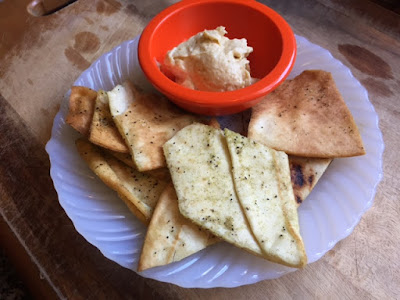 As for non-local goods, I found Coconut Bliss ice cream, Hilary's vegan sausages (this is something I've not seen anywhere else!), Gardein breakfast pockets, Tofurky hot pockets, Victoria Vegan pasta sauces, Daiya & Hilary's dressings, and Amy's cheeseless pizza. And those are just a few items! There are many more. 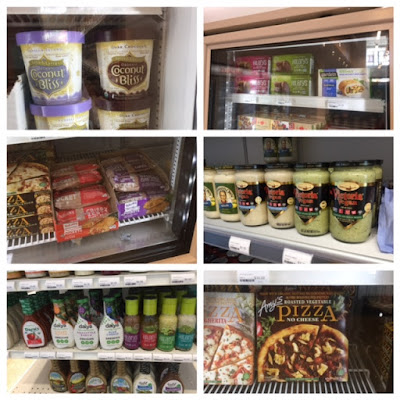 I was also impressed with their large nut butter selection! This is a lot of nut butter for a small store. I don't know if I've told y'all, but I'm a bit of a nut butter hoader. I typically have about 10 jars open. I think I'm at 16 jars right now. (Yes, I know I have a problem). 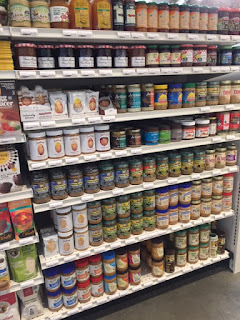 Curb also has a salad bar. 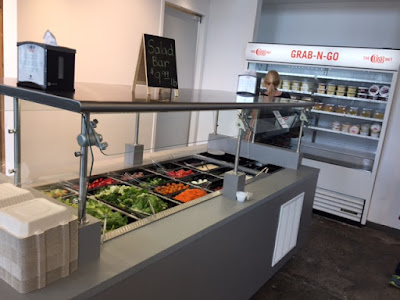 And a hot bar with weekly lunch specials! And the hot bar always has vegan items! 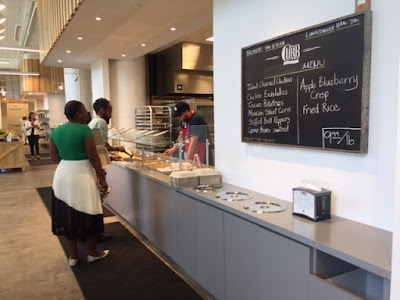 Last week, I got this platter with Lentil Dal, Roasted Potatoes, & Quinoa Asparagus. Everything was so well-seasoned and fresh! I enjoyed this on my lunch break on the patio at Concourse. 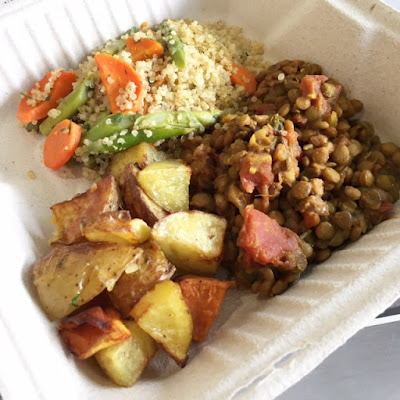 And then today, I totally didn't intend to eat at Curb again. But this morning, they posted the lunch menu and it included Vegan Stuffed Peppers! So I had to try them! I got one to go and brought it home to eat with my hummus and pita for lunch. This was stuffed with a rice-lentil blend and topped with a yummy tomato-pepper sauce. 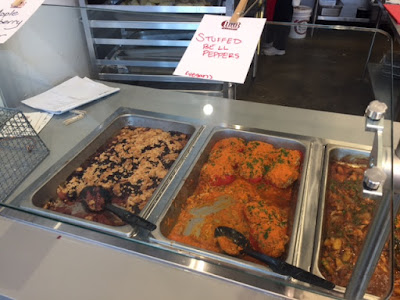 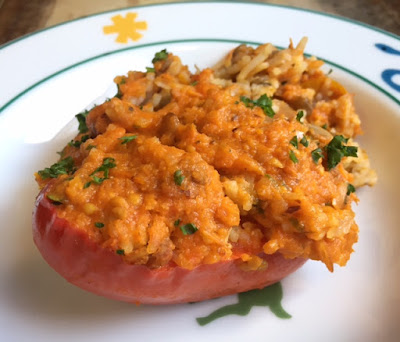 I'm so thrilled to have Curb Market in the neighborhood! I think I've been almost every day since they opened last Wednesday! They'll be seeing a LOT of me there.
Posted by Bianca at 9:00 PM

If i had a market that awesome near me i would be there all the time too!! How exciting! And vegan hot bar item every day would have me constantly poking in to see. I love that they even offer that- as little as five years ago most people didn't even know what vegan really was, so i love that there is enough support for them to have as part of the regular menu :)
Ttrockwood

I agree with everything mentioned above! It looks like a great place, and I just love seeing so many vegan items, it shows that we are growing and that is the best news ever!
I just saw those Hilary's vegan sausages the other day at Sprouts. I wondered if anyone else had tried them.
The stuffed pepper looks ridiculously delicious!

What a great market! Honestly, the slightly higher prices can be worth it when you can get everything in one spot and not have to make a million different stops. Plus it seems like shopping there is an experience as well which is nice. I have a fully vegan market opening near me soon and I can't wait!

Thank you for your post, I look for such article along time. myself very happy to read it because it can give me more insight,thanks
dewa poker

This place looks awesome, so great that it is so convenient for you as well!
That sorbet sounds really refreshing, I have never seen a flavour like that before.