I said I'd give you sandwiches this Vegan Mofo, and boy, do I have a bunch for you tonight! Every Wednesday night, my friends and I have dinner at Imagine Vegan Cafe. We've been doing so since the all-vegan comfort food joint opened over a year and a half ago. Sure, we've missed a few Wednesdays here and there. But for the most part, all or some of us are there each week.

Needless to say, most of us have had everything on their massive menu. And we all have faves and go-tos. Imagine has a great selection of entrees, like "chicken" fried steak with gravy, red beans and rice with Tofurky sausage, chili cheese fries, vegan cheesesticks, and fried eggplant parm. But there's also a huge sandwich menu!

I asked all my friends to order sandwiches tonight for the sake of this post. And because they are awesome, they all agreed. I ordered my all-time fave — The French Dip Sub: 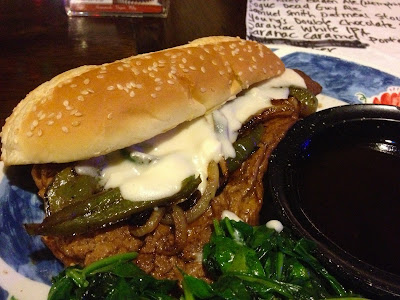 I have to admit, when I gave up meat in 1994, I was most sad about never getting to eat a French dip sub again. Roast beef was my favorite meat, and it was years before I had a vegan version. This one is, by far, the best vegan French dip sub I've had. They use a tender seitan steak and a salty, "beefy" dipping sauce. Vegan cheese and sauteed onions and peppers are available by request.

All sandwiches come with one side item, and although they have great fries, I usually opt for a veggie so I won't feel too guilty for dessert. This time, I went with sauteed spinach.

My friend Mike also loves the French Dip Sub, but I told him he couldn't order one because I needed another sandwich for my blog. So he chose something he'd never had before, the Chicken Bacon Melt: 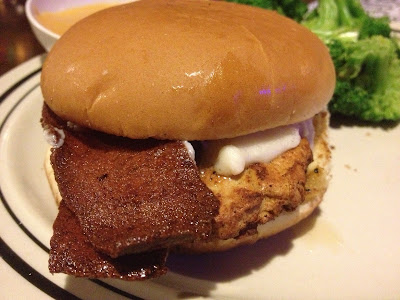 I've had this before, and it is superb. They use Gardein chicken and Smart Bacon, and the sandwich is topped with creamy vegan cheese. It's so good! Here's what Mike had to say: "It was really good. I thought the tenderness of the chicken complemented the crunchiness of the bacon very well."

My friend Shay went with her go-to Fried Chicken Sandwich: 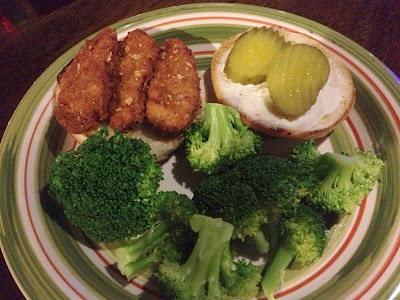 This is so simple and delicious — fried Gardein tenders, Vegenaise, tomato, lettuce, and pickles. That's it. No cheese. No frills. I like this sandwich with a side of Imagine's creamy vegan mac & cheese, but Shay opted for steamed broccoli. Here's what she had to say: "I love it because fake chicken is better than the real thing, and the Vegenaise is definitely better than the real thing. And the pickles just make everything better."

Stephanie (a.k.a. Poopie Bitch) ordered something new to her too. She ordered the Buffalo Chicken Sandwich: 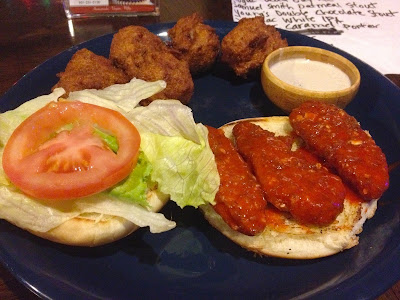 It's similar to the Fried Chicken Sandwich but with the addition of buffalo sauce and vegan ranch! It's so good and spicy. And just because she could, she ordered hush puppies on the side. Here's what Stephanie had to say about her sandwich: "I love anything covered in buffalo sauce. It has a nice level of spice. I got the hush puppies because anything deep-fried is a good choice for a side dish."

And if all that sandwich madness wasn't enough, dig this. So Stephanie bakes all the desserts that Imagine sells through her home-based vegan baking company, Swell Baked Goods. Tonight, she brought a selection of pumpkin latte cupcakes, pumpkin cream cheese blondies, Kalua chocolate cake, and more. But unlike some weeks, she wasn't planning on bringing any cookie sandwiches.

But when I told her about my planned Imagine sandwich post, she made a cookie sandwich JUST for me! She already had Pumpkin Chocolate Chip Cookies for sale there, so she stuck two together with vegan buttercream and put it behind the counter, reserved for me. Isn't that awesome? I really have the best friends ever. 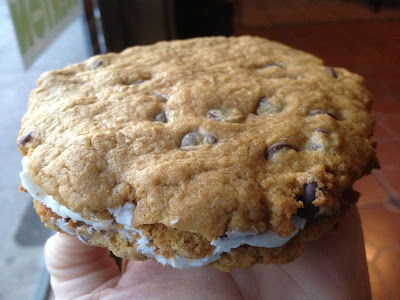 Look at that! OMG! The cookies were so moist and chewy, just like a perfect cookie should be. And the buttercream was just the right level of sweet. YUMMY!
Posted by Bianca at 10:51 PM

Very interested in the french Dip sub. Never really had anything like that. And you DO have a great bunch of friends! What a fun outing. That cookie sandwich looks killer.

Oh man. I have to get to Memphis!

Oh my god, with a menu like that I don't know how I'd ever pick! The French Dip Sub looks amazing but then so does the Chicken Bacon Melt - wowzers!

Holy crap, that sandwich cookie looks like those pre-packaged, soft oatmeal cookie things with the white icing in the middle that my sisters and I used to, like, beg and steal and cry to get ahold of as kids -- except better. I think they were made by Little Debbie or something.

Great post. My family loves Imagine! When my wife and I give the kids (8 and 4) a choice of restaurants, they always pick this place. We live in Jonesboro, AR, (about an hour from Memphis) and drive over sometimes just to eat. I'm slowly working my way through the menu.

I love Imagine so much.

Wow, what amazing looking sandwiches!! I would be a fan of that classic chick'n sandwich with the pickles, yum! A side of hushpuppies for sure!! That is so cute that she made you a cookie sandwich! A pumpkin cookie sandwich at that, yum! Looks perfect!

Yum! I love their sandwiches, although I've not tried the French dip sub. Do you know what brand of turkey was used in their now-defunct turkey sandwiches? Those were so good.

Our vegan meet-up group was talking about making a road trip to Memphis just because of your blog. We all realized last week that we are fans of yours and we all want to eat at Imagine.

I love Imagine! I was so happy to find an all vegan restaurant when I moved to Memphis a year ago. And the desserts - so yummy!

I love that you made your friends order sandwiches! They all look really great. If I'm ever in Memphis, I think I'll have to eat every meal at Imagine!

That restaurant reminds me of Veggie Grill which, fortunately, is in my neck of the woods. I love their "chickin" meals and so on.