... sometimes I wish I was! Not so much for the religious stuff because I'm not really into religious stuff. But I love all the traditional foods and fun Yiddish words like "fahklumpt" and "mazel tov." One of the reasons I love Isa Chandra Moskowitz's books so much are for all the veganized, traditional Jewish recipes. I adore her Matzoh Ball Soup from Vegan with a Vengeance, and one of these days, I'll get around to trying her knishes. I even shop at Memphis' "kosher Kroger" and find awesome, accidentally vegan foods there all the time.

This week for breakfast, I've been enjoying Isa's Matzoh Brie from Vegan Brunch: 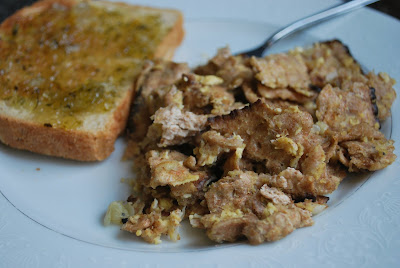 I'll admit, it's not pretty. What you have here are soaked, broken pieces of whole wheat matzo (the burned edges were already on the crackers, by the way) fried in oil with onion and blended, soft tofu. The tofu coats the matzoh, just like fried eggs do in the traditional recipe.

Matzoh brie (or matzoh brei, as it's often spelled), matzoh fried with eggs, is commonly eaten for breakfast during Passover when Jews can't eat unleavened bread. However, according to Wikipedia, some Jewish traditions aren't down with matzoh that's been soaked in water, so not everyone is allowed to eat this.

Since I've never had the eggy version, I didn't really have any way to compare this. But it's tasty. Not so sure it'll go into heavy breakfast rotation. But I'll probably make it again one day. Isa suggested serving the matzoh brie with dill, so I did. But I see other recipes online suggesting people eat it with preserves or syrup. I may give that a try tomorrow.

By the way, I know it's not Passover, but if it were, I guess that whole grain toast with zucchini marmalade on my plate would have totally undone all the good I was doing by eating unleavened matzoh. Oops!

What are your favorite, traditional Jewish foods?
Posted by Bianca at 10:40 PM

Oh my goodness, this is my favorite part of passover! Before vegan brunch it never occurred to me to veganize this recipe, but now that I have I eat it every morning of the holiday. (I even got my matzoh-phobic boyfriend to like it.)

My other faves? Tzimmes, kugel, cholent... here in budapest it isn't hard at all to find vegan Jewish treats.

Borscht !
Served cold, in a clear glass. My favorite place, on Manhattan's Lower East Side - Yonah Schimmels Knish Bakery - puts sour cream in it which makes it a stunning shocking pink. I would veganize this by just adding some non dairy milk. There is plenty of dill in there as well. Eat/drink that with one of their many knishes (cabbage is my favorite - and vegan)along with a huge half dill pickle. Great meal. I'll be there in August ! For now, I can make do very well in Paris's jewish neighborhood in the Marais. Plenty of fine choices:Spinach and red pepper Borek, Latkes (right up your alley southern fried gal), Poppy seed streudel. Plus, open on Sundays - a rarity in Paris. Good treats for a lapsed catholic like me.

i like isa's matzoh brie, but jenn shaggy's is uber-awesome. i know you've mentioned her cookbook, so you should try it next time you have a hankering. there is a brunch place in NYC that does a vegan MB better than anywhere i've ever had it, so i keep trying to mimic that... Jenn Shaggy's is the closest i've gotten. enjoy the sweet MB tmrw :)

I love matzoh pizza. My Jewish friends always found my affection for matzoh to be a little weird, but I love the stuff.

A good vegan latke. There is simply nothing like it. Due to it's terrible for you nature, I only have them once a year at Hanukkah. My dad makes the best vegan latkes... Seriously.

Awesome!! I have had the same thought about being Jewish. Seems they come together & have fun and eat lots of food. Lots of vegan friendly stuff too! This looks great!

I grew up on Matzo brie (half Jewish!), and I can assure you that the non-vegan kind is one of the most delicious, crave-worthy things I've ever tasted in my life. It's definitely the thing I miss the most being vegan. I have yet to make Isa's version though, because I'm just so afraid it will disappoint! haha now to find gluten-free matzo... :)

I love knishes, but I love the sweet stuff more--rugelach and linzer tortes and almond crescents. All the stuff they sell in the delis in New York. The black and white cookie--though not exclusively Jewish--is my favorite.

Matzah Brie is the best! I ate it when I still ate wheat but I'll probably make and exception once in a while because it is so good. I like mine with a little salt and some maple syrup. Sweet and salty SO GOOD. I love desserts too, and Hamentashen (Purim cookies) are so good an fun to make! Ruggelach are a yummy dessert too :) ANd nothing beats a latke on Chanukkah. Clearly we like carbs and sugar!

I grew up with Jewish father - and never had matzoh brie - and love matzoh! My favorite Jewish holiday dish is potato latkes - so yum! Last year I veganized "chopped liver" - which was also very tasty!

It holds together a bit better, kind of like a quiche (though not really), with the eggs. Not surprising. I like it without onions, topped with cream cheese (now vegan) and your fave jam/jelly/preserve. Mmmmm...I might be making this sooner than passover. haha

I'm a latke lover. I'm also a hound for the manischewitz boxed yellow cake for passover, which can easily be made vegan. Never been a fan of the brie, but glad you like it!