Breakfast for dinner (a.k.a. brinner) is my favorite meal. When I was a kid, my mom would occasionally serve scrambled eggs and bacon in the evenings. Even though those breakfast foods always tasted great in the a.m., they tasted even better after the sun went down. That's why this dinner of a Tofu Omelet with Tofu Ricotta, Sundried Tomatoes, and Basil was so damn good: 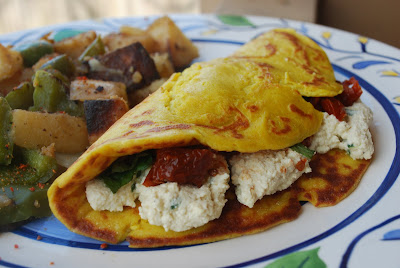 The omelet is Isa's amazing tofu version from Vegan Brunch, which I've made many times. I typically fill mine with vegan cheese, spinach, and mushrooms. This version was inspired by another variation listed in Vegan Brunch that calls for cashew ricotta. But I made the Basil-Tofu Ricotta from Vegan with a Vengeance instead.

You see, Poopie Bitch and I are hosting a vegan cooking demo on March 13th at the Southern Women's Show, an annual expo featuring cooking demos, celeb appearances, fashion shows, and other such stereotypically-girly things. We originally planned to make this omelet, but we realized that a) the massive amount of omnis there might be freaked out by too much tofu, and b) an omelet might break on stage and how embarassing would that be?

Instead, we'll be making the Chorizo Sausages from Vegan Brunch. Everybody (including omnis) love those. But back to the omelet — despite it not being as omni-friendly, this tofu omelet is one of of my fave recipes from Vegan Brunch. And the ricotta/sundried tomato filling is superb!

I served the omelet with a batch of Diner Home Fries, also from Vegan Brunch: 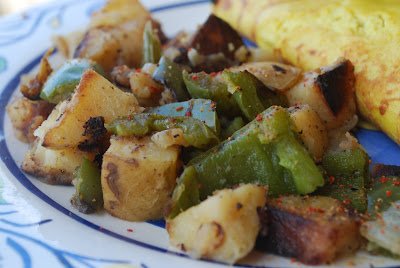 Awww I wish I could go to your cooking demo, that would be so much fun!

Okay, I just woke up, I haven't had breakfast yet....and....and....this post has made me SO hungry I can't even think straight. I love those Vegan Brunch omelets, but stuffing them with ricotta and all the deliciousness you've got there has taken these babies to a whole different level! I think I'm in love!

Your food always looks SO good.
Seriously, how do you do it???

I'm constantly getting stuck in ruts when it comes to my main meals. x

Vegan Brunch is one of my favorite new cookbooks! I've tried half the recipes in their and am steadily working on the other half. I think my favorite so far is the broccoli quiche. It's so.....retro!

we haven't had brinner in forever. i think we'll have to next week, Bianca - now you've got me craving it! my mom used to make use scrambled eggs 'n bacon sammies sometimes for dinner. i used to love those. that's awesome on you and Steph do'n a cooking demo at the women's show - i can't wait to read all about it! :) i agree that some people get freaked out over so much 'fu (those people crack me up!) and i too would worry about the breakage - or sticking - my omeletes always stick. sadface. the chorizo sausages = a great 'n yummy choice though, fo 'sho!

Really, I'm eating oatmeal right now and just want to throw it out looking at these beautiful pictures! I have not yet tried tofu omelletes yet but I'm going to have to try, your photos make them look delicious!

Lauren @ Eater Not a Runner said...

Breakfast for dinner is the best, and yours looks amazing!

Brinner is the best! Gorgeous omelet!

Awesome job! It's so cool you and poopie are doing a demo! Have fun, I know you'll both be great.

WOW, great combo. I have both vegan brunch and vegan with a vengeance but I haven't tried the omelet or the cheese. I am officially planning on it! I have tried that chorizo though, yum!

That looks so delicious!

This looks amazing! I STILL have not tried making these omelets. I need to get on that.

Brinner is my favorite, too! So funny that the same foods can taste different/better at different times of day.

I haven't tried the omelets yet, but you make them look really delicious here. It might be time... If you ever make your way to Knoxville for a cooking demo, definitely let me know! Good luck with it!

I love brinner, too! Everything here looks so good. I seriously need to get my hands on a copy of Vegan Brunch.

Love those diner home fries, but I always add a bunch of smoked paprika--because I'm crazy for paprika. I need to try this omelet.

That looks so damn tasty!!!

We used to have breakfast for dinner every once in a blue moon growing up. I actually liked when we had free eating nights, you know make your own sandwiches or whatever you wanted.

Delicious! My favorite brinner as a kid was definitely pancakes, sliced banana and oj.

that omelet looks awesome. thanks for reminding me i need to make this again soon.

I love tofu omelets for dinner! I have to try filling them with tofu ricotta. That recipe from Vegan with a Vengeance is the best!

Congrats and good luck on the cooking demo--how exciting!

Your omelet puts mine to shame :-)

That looks AMAZING! have fun at the expo- teach them southern belles how veggie food is done!

I didn't realize vegan omelets were POSSIBLE. Count me IN.

how in the world can people call vegan food boring! that looks out of control!!!!!! yuuuumm! who doesn't love brinner?

http://laurenlanzaosias.blogspot.com
be a follower, not a hater

hi, i meet your blog trough the 'all about vegan food' and i
must say that i loved :) i decide to check out your blog because of 2 things: the name, that sounds me cool, and (don't go think that im a crazy person) because of the films that you selected in your profile. they're pretty much my favorites too, and makes me think: this vegan blog can't be boring :D
by the way, is very unusual find vegan people who likes john waters around here, in brazil... it's sad, though hahaha.
best wishes,
juliana - rio de janeiro - brazil.
(sorry for my bad english)

Oh my goodness that omelet looks so good, I haven't made that recipe for ages.

Good luck with the cooking demo! Sounds like fun, and a great way to spread the word :)

The brinner pics look delicious - the vegan brunch omelettes are one of my faves from that book.

YUM! I love breakfast for dinner!

Everything looks fantastic! Glad you posted these! I still have yet to make omelets and I think this will be a good one to try.

Aren't tofu omelets awesome?? Especially when filled with ricotta and sundried tomatoes! (And those home fries are pretty much all I'd ever need as a side dish). Congrats on the cooking demo--hope you have a great time! :D

that omelet looks great! I love brinner too, but I always called it "brenner"

Delicious! I absolutely LOVE breakfast for dinner! There's just something about it that feels naughty and rebellious.

You are totally right, most omnis freak out at the mere sight of tofu. The chorizo sausages will be a big hit though! :)