Soy Curls, How Do I Love Thee?

My Whole Foods doesn't sell Soy Curls, and since WF is the only health food store we have in Memphis, I have to order these chicken-like dehydrated soy protein strips. Thankfully, I placed an order for Soy Curls on Vegan Essentials last month (thanks Papa Crunk!). 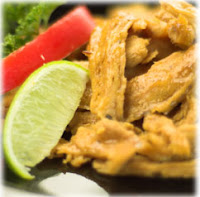 If you've never had them, Soy Curls are basically just chicken-strip-shaped hunks of textured veggie protein (also known as TVP). They don't have a flavor on their own, but after re-hydrating in boiling water, Soy Curls soak up whatever spices and seasonings they're cooked with. They're awesome in stir-fries, mixed with barbecue sauce on whole wheat buns, and tossed with vegan alfredo and pasta. And they were delicious in these Cheezy Un-Chicken Quesadillas: 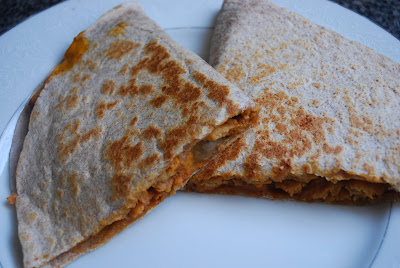 The recipe is actually an appetizer in my cookbook. Since Soy Curls aren't readily available everywhere (including Memphis), folks can use Morningstar Farms faux chicken strips, flavored seitan, or plain ole tofu in this recipe.

Besides the Soy Curls, my quesadilla contains some other stuff that I'd tell you about ... but then I'd have to kill you because it's going in the book. Sorry to be such a tease, but here's an inside shot: 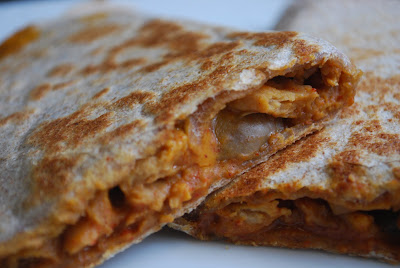 I served mine with Tofutti sour cream and Newman's Own all-natural Bandito Salsa. And I steamed some kobocha squash for a hearty winter side dish.
Posted by Bianca at 9:32 PM

wow, i don't think i've ever had soy curls!

I'm so glad I read this before I ever bought soy curls - I was curious, but I thought they were like, an air puffed snack or something, like snap pea crisps or veggie booty. Whoops. Thanks!

Last order I made from Vegan Essentials I got these for the first time, and we had them in fajitas last week. They're SO good! I thought they were way more tender than I expected a TVP product to be.

Those Quesadillas look amazing. :) I've been craving Mexican food like no other lately!

I absolutely adore soy curls!!! You really can use them for everything!!!! I made a southern BBQ style sandwich topped with coleslaw once and my meat eating relatives thought it was chicken! Go Soy Curls!!

When is your cookbook due out? I've been drooling over these teasers for too long! ;)

I've been dying to try these... I guess next time I'm in the US. Those quesadillas look especially amazing.

I've never had Soy Curls either. Not sure if they're worth the money.

You can also buy them online directly from Butler Foods. Soy curls are awesome!!!

I still have not used soy curls. I'm loving that quesadilla, ahh it looks yummy!

Paul Newman makes so many yummy sauces and salsas. His green tea is one of my fav's!

You better come out with that cookbook soon because all this mystery is killing me! Okay, okay, actually it is just making me VERY hungry, but STILL! NO FAIR! Your recipes are going to be stellar and I can't wait to order a copy.

i just discovered kobocha squash a few months ago - it's one of my new favorites. i love it so much, and i love that it's similar in flavor to a delicata. mmmmmmm! soy curls = the best! there's a local foodz store around here that carries them. you just reminded me that i should totally pick some up. i haven't had them in over 2 years. i miss 'em! your quesadilla looks super stellar, Bianca! hope you had an awesome weekend & happy monday!

Yummy! I've only had soy curls once, when I was in Portland. I had them at a super-healthy restaurant, so they were kind of squishy and steamed; I think they would taste much better in your quesadillas!

You must must must make the chourico tacos in Vegan Brunch (and don't skip the frilled pineapple salsa). It's the best thing in the cookbook and one of my favorite Isa recipes overall. And the recipe calls for Soy Curls!

I've never heard of soy curls before! I think this is great. Will look for them next time I'm at WF...

I've never tried these before, but I love TVP products. They're so cheap and versatile! I bet they'd be great as "chicken" fajitas.

Ive actually just found out about these. We just got them in at my work and i was so curious about how i would use them. Thanks for the awesome idea! :)

Yum...that quesadilla sounds great! Wanna share it with the testers to test out?! I'd be on testing that one that asap!

This post reminds me about the old days of good blogging. If you can please visit my site [url=http://kitchencheap.co.uk/]kitchen cheap[/url]

I LOVE soy curls! They are one of my favorite ingredients! They are technically a textured soy protein BUT they are super different from TVP because they are made from the whole soybean and they don't have any chemicals or anything! They are in my local Whole Foods... maybe you should ask about it, they just might start carrying them. You can also order them online at www.butlerfoods.com
Your cookbook sounds AMAZING!