Best Meal of the Millennium

As an avid eater of down-home comfort food, I've never cared much for gourmet grub. But then again, I've never really had the opportunity to eat at a fancy-schmancy restaurant since all the ones around here serve nasty meat entrees. But I spent the last several days in San Francisco at an Association of Alternative Newsweeklies conference for work. And while in town, I just may have been converted to fancy foodie-ism at the totally vegan Millennium Restaurant.

I met up with fellow PPK-er/vegan blogger Erin of Vegan Homemade at Millennium on Thursday evening. The only picture of us turned out blurry, but here it is anyway: 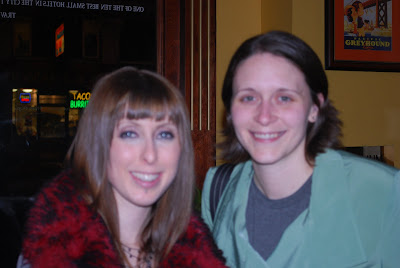 As we gabbed about how excited we were to be able to order ANYTHING on the menu, our sweet server brought this Crusty Bread with White Bean Spread to the table: 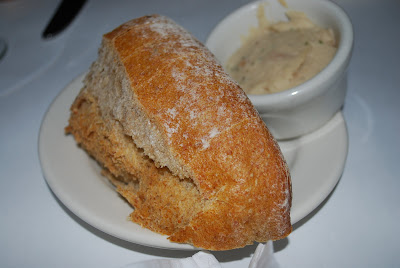 I'm so used to eating plain bread at restaurants since the butter most places offer isn't vegan. But I happily schmeared this spread all over the chewy, white bread.

Erin and I split a bottle of grenache/syrah/mourvedre. All their wines are organic and vegan! And we chose a couple of appetizers to start with — Fried Oyster Mushrooms with some kind of Sweet and Sour Dipping Sauce (I asked for menus so I could blog the formal names, but ended up forgetting to take them): 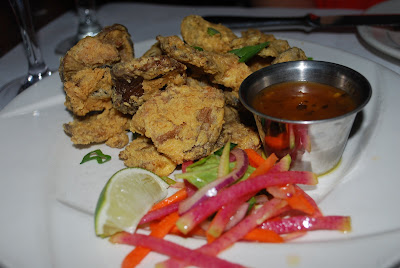 These mushrooms were the second best part of the meal (I'll tell you about my favorite part in a second). I purchased the Millennium's Artful Vegan cookbook while I was there, and this recipe is included ... so I will certainly be trying to re-create them soon.

We also whet our appetites with this Black Bean Torte: 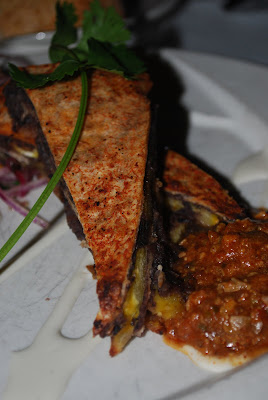 Smoky black beans meet sweet, caramelized plantains inside a whole wheat tortilla. The torte is drizzled with cashew sour cream and served with pumpkin-habanero salsa verde. So, so good.

I had a really hard time choosing an entree, considering that a) I'm an indecisive Libra and b) I'm not used to actually having more than one or two choices in a restaurant. But I finally decided on the Caribbean Jerk Tempeh: 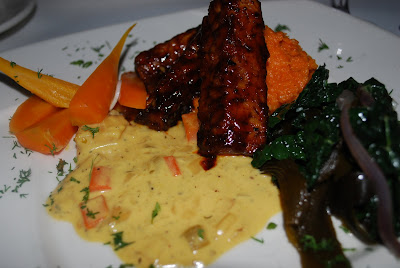 The salty-sweet tempeh filets were served with coconut and achiote root stew, sauteed kale with caramelized onion and sea veggies, garlic mashed sweet potatoes, and clove-spiced pickled carrots. Absolutely delectable. My favorite part was the coconut stew, but they didn't put much on the plate. Also, the sea veggies (Erin guessed it may have been wakame ... I couldn't tell) in the kale were really tasty. 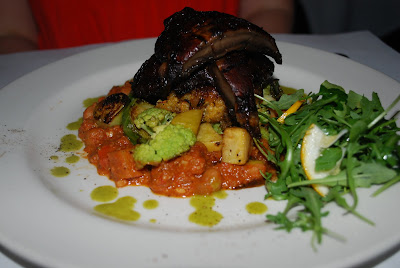 I don't remember what all the side dishes were, but it was served atop some kind of savory chickpea stew with green cauliflower and a millet cake. I took a bite of her mushroom, and it was delicious — smoky with a hint of something like Ethiopian berbere spice.

By the time we finished all this food, we were stuffed. But there was no way we were leaving without dessert. We decided to split something, but our awesome server hooked us up with a complimentary plate of house made truffles, cookies, brownies, and fruit: 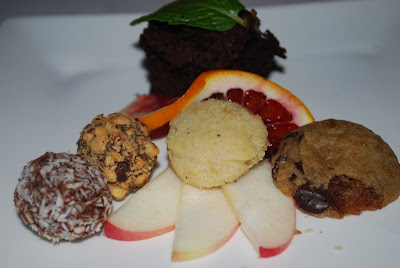 So we broke each cookie in half and savored each bite. Then we dug into the dessert we chose to split — Millennium's famous Chocolate Almond Midnight: 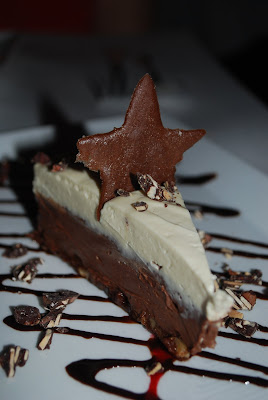 This was by far the highlight of my meal. A mocha chocolate filling and super-creamy white chocolate mousse sits atop a crunchy almond toffee cashew crust. The pie is served with a bit of raspberry sauce for dippin'. OMG ... this was heaven in my mouth. Unlike most creamy vegan pies, this didn't taste at all like silken tofu. We couldn't figure out how they made it, but I would make the trip back to San Francisco tomorrow if I could ... just for another slice of that pie!

Well, that concludes the best fancy meal of my life so far. I'll post the rest of my San Francisco food pics on Monday night.

YUM! That food all looks so GOOD, especially the portobello mushrooms. Next time I'm back in the Bay Area I will definitely go there!

I've heard about Millennium, but this post puts it on my list of places I need to visit. Everything looks dazzling and delicious. I ate at a truckstop with some friends today - oatmeal and toast, thank you - and this is the exact polar opposite of that experience.

oh gosh! no wonder you were converted to fancy foodism! your entree looks even better than dessert though! i think that's exactly what i would have ordered!

I love love love Millenium Restaurant! My hubby (an omni) and I went there for our second wedding anniversary, and it was seriously the best meal either of us had ever eaten. I'd go back to San Francisco (one of my favourite cities) and Millenium in a heartbeat. Thanks for the great post!

wow that all looks so freakin' good!! I absolutely must go there if/when I visit san fran (I've never been, and I live in LA, a sin I know). Glad you two had fun, looks so delicious, especially that pie!

Oh my goodness, looks like a dream meal. Especially the black bean torte, I want to make that! And that jerk tempeh looks absolutely fabulous, that's what I would have ordered too.

Everything looks so amazing! I am so happy that we have access to a similar restaurant not too far away.

There are Millenium cookbooks, right? I need to order them!

Holy crap every thing looks so yummy! I have heard that the Millennium is the place to be if your searching for a delish food experience. Thanks for sharing it with us :)

Millennium really does rock. Glad you had a great meal there!

That looks AMAZING! Especially the desserts ;-)

Yummy! One day I will get there, but it isn't often I find myself in SF with enough time (and under the right circumstances) to be going to Millenium.

PS - The chocolate Almond Midnight is in their first cookbook, which I have. Lemme know if you want the recipe!

Oh my word! So much amazing looking food. How does so much deliciousness fit into tiny little Bianca?

The great, wonderful mysteries of life.

That all looks SO good!!

I love, love, love Milennium. Your visit looks delicious! I NEED some of those oyster mushrooms immediately. I might have to buy that cookbook...

Can't wait to hear about the rest of your trip!

I ate there for the first time a few weeks ago and was also blown away by the food! I had the pumpkin curry and the raw seaweed salad...TOTALLY DIVINE!

It's so nice to be able to go to a restaurant and order anything on the menu. Someday I will get to that restaurant. I've checked out that cookbook and many of the recipes are pretty detailed and alot of steps but they are really good. The food looks so good.

Your pictures turned out fantastically considering the lighting! It was so nice to meet you, and the meal was fabulous!

the porttobello dish looks so pretty I wanna try it

How lucky! I'm definitely jealous, we don't have many options here. I need to get out of town...

Wow that brings back great memories of our trip to Millenium and wine country. Looks out of this world!

Millennium and Candle 79 (in NYC) have served the most amazing food I've ever eaten. Soooo good.

so awesome that you got to meet Erin AND enjoy yummies at Millennium! i've heard nothing but super stellar things about that place! the chocolate almond midnight sounds like the best thing ever - and so do the oyster mushrooms. i had no idea they had a cookbook. amazon wishlist. yay! i'm so jealous of all the delicious fancy pants yummies you got to enjoy, Bianca! :)

Wow, it all looks good. Cute bread animals! I need to get to Millenium on our next trip to the city!

I really look forward to going back to SF and finally try that restaurant. Everything looks delicious!

Chocolate Almond Midnight has been on the menu since they opened! It's the best. The guy who created it now works at The Plant Cafe. I love that mushroom dish too!

we went to Millennium on our honeymoon in SF and it made me feel so...normal. like you said, being able to choose from anything on the menu is awesome - and everything there is delicious. i'm so glad you got to go :)

My gosh! no wonder you were converted to fancy foodism! your entree looks even better than dessert though! i think that's exactly what i would have ordered!