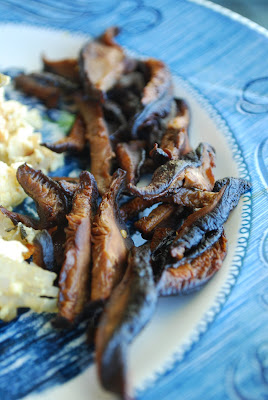 Yum, yum, yum. That's what I have to say about it. Though the texture (and size) is a little different from soy bacon substitutes, the shitake bacon tastes as good (or maybe even better) than Smart Bacon or other subs I've tried.

As for a recipe, I stupidly didn't write or print the recipe I saw on the PPK and a search later yielded no results. But a quick Google search brought me to this YouTube video of someone named Jenny demonstrating her shitake bacon recipe. You outta watch it, but since I changed things up a bit (namely the cooking time), I'll share what I did.

Preheat oven to 400 degrees. Drizzle soy sauce over mushrooms in a mixing bowl. You don't want to drown them in it, just make sure they all get coated. Add Liquid Smoke (a little dab will do ya) and olive oil. Stir and allow to marinate for about 10 minutes. The mushrooms should absorb all the liquid. Spread out on a baking sheet and bake for about 30 to 35 minutes or until most are crispy. Note: The original recipe said to bake for 10 minutes, but mine weren't crispy at all after ten. So you might wanna check them often.

Viola! Now you have some awesome bacon for breakfast, to sprinkle over salads, or to top soups. I served mine with a quick Tofu & Hash Brown Scramble: 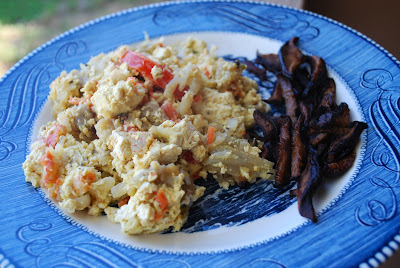 i'm still on the perfect fake bacon quest. i love this idea! thanks for sharing (and sharing your modifications)

Bacon was my very favorite pregan thing to eat and after a one time disastrous experiment with a mock meat bacon sub I've been scared off. But these look delicious and so simple! We rarely get a wide variety of mushrooms here in Bahrain, do you think I could try this with portabellas?

I made this a few weeks ago... and YES, it's amazing! Yours looks even better than mine :]

What an interesting idea! I must have missed this one. You can always find awesome recipes/ideas on the PPK!

This is definitely on the menu for our next scrambled tofu dinner. Thanks!

I keep meaning to try the eggplant bacon...

I'm not a big mushroom fan, so I don't know if this will fly with me, but "bacon" anything is sooo good!!

savory breakfast food- I love it! I've never tried shitake bacon either, what a great idea.

YUM!
I just made the PPK recipe last night! It's totally amazing and easy:

Also I added 1/2 tsp maple syrup and 1/2 tsp balsamic to my mixture.

Oh man they were SO good... I had them with steamed greens... mmm!

This looks delicious! I must try.

What a great idea - eggplant bacon sounds tempting too. It sounds perfect with the hashbrowns - nice post title too :)

I saw this on the PPK too but haven't gotten around to making it. It looks / sounds so good though, I might have to buy some shitakes and make some for brekkie at the weekend.

I haven't had the chance to look at PPK for several weeks. Thanks for letting us know about this. Sounds fantastic.

Lordy - I'm coming to your house for breakfast, Bianca! I wish I could find portobello shrooms here...I'll just look at yours and drool.

Wow... That's a cool idea! How do people think of this stuff??

YUM! Those look so tasty. I LOVE mushrooms, and I also love anything smoky tasting, so I am going to be all over this one.

I cannot wait to try this!

I saw that on the PPK, too! I really have got to try it!

I thought eggplant bacon was totally gross, but then again I don't really like eggplant! This, however, looks incredible!

Dang, I had never thought of this! awesome.