I know I've complained a little excessively about the weather this season. But it's cold, y'all. I don't do well when temperatures fall below 70 degrees, and thankfully most Memphis winters are fairly mild. But it snowed AGAIN today ... for like the 4th or 5th time this year. Everybody knows that the South isn't supposed to get more than two snows per winter. This is whack.

Now I know some of y'all have seen a crap ton of snow, and I probably sound like a wussy. It's true that we never get more than an inch. But folks down South don't know how to handle snow, and the roads get all icey and people freak out.

Thankfully, I had this steamy bowl of Black Bean Soup from the Vegan Yum Yum cookbook to warm me up: 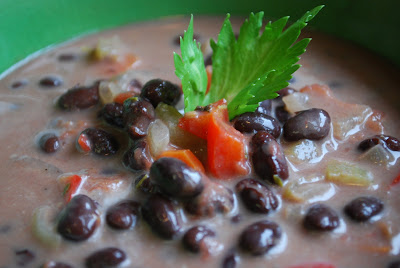 This might look like any old black bean soup, but it's not. It is a Lauren Ulm recipe, after all. The soup contains a small amount of coconut milk, in addition to the red bell pepper, celery, carrots, and black beans. The coconut milk gives the soup a creaminess that trumps all other black bean soups. I doubt I'll ever make anyone else's black bean soup recipe again.

I served my soup with a slice of Sourdough Bread with Kenzoil and a side salad (not pictured because you know what a salad looks like): 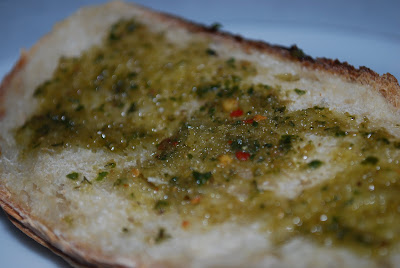 About a year ago, I vowed to stop eating white bread, but after reading Alicia Silverstone's The Kind Diet, I've decided an occasional loaf of fresh-baked sourdough is okay. Several of her recipes call for sourdough, and she's like a beacon of healthy eating. So she can't be wrong, right? Anyway, I bought this loaf at Cafe Eclectic, a cute little vegan-friendly Midtown coffeehouse/bakery. Even if white bread is bad for me, I feel better knowing that I supported an awesome small business by purchasing it. Besides, they were out of whole wheat bread. I can justify anything.

Oh, and the green stuff is Kenzoil, which I reviewed here. It's an olive oil dressing made with fresh basil and garlic. Best bread topping ever. Unfortunately, this was the last teaspoon-full in my bottle, and it's not available for sale in Memphis. I'll have to order some on their website.
Posted by Bianca at 11:25 PM

I love cooking with black beans, will definitely try this soup. Thanks for the link on the spread - looks delicious. Sourdough rules. Sending you some California sunshine...

I love your blog. I have been off and on vegetarian for 8 years and now Vegan for... 1 month! Where I live has whole foods store but it is 40 minutes away. I'm having trouble making the things Iwant to make because I don't have the resources. Do you suggest any online websites to purchase items from?!

Soups and curries are the best for cold winter days. We've had a lot of snow in south-west, UK this year and we don't know what to do with it either! I wouldn't mind so much if we got your summers...

You're not the only one who hates the winter. I complain about it practically every time I go outside. I was born and raised up north too, but I still can't stand the cold.

Your soup looks awesome. I really need to check out the Vegan YumYum cookbook.

Alicia Silverstone is amazing. :) I love her recipes and love that she says it's ok to give ourself 'permission' to eat occasionally less-healthy things (ie. mochi, white bread, processed foods) once in a while for our mental health. <3

I'm sorry about the snow, love. I'm up in Mass. and we've had surprisingly little snow. :o Last year was white, white, white and this year has been cold but mostly green (with patches of brown...ick)

That black bean soup looks amazing! being originally from California, I love any mexican food I can get my hands on and recently bought a can of black beans...I will definitely be making this if I get the chance!

mmm...coconut milk in black bean soup sounds great! We have snow again too. My pups and I are sick of cold weather.

That soup and bread looks yummy! I just ordered some Kenzoil online so I could try it. They have a great deal for first timers. It was only $6.99 for a 5oz bottle, that included shipping! Thanks for a great blog!

I always feel a little guilty for straying over into sourdough territory too! I'm a pretty strict whole-grain type of gal. But sourdough always gets me! It's nice to know I'm not alone in this! :)

The soup looks great too!

I don't feel guilty about eating white bread when I've baked it myself!

Look at your cute little garnish.

Another cookbook recipe I dont have;-(. Looks super delicious.

I'm so with you on the weather. I'm not shovelling snow over here, I'm also shoveling soup into my mouth! That black beans soup looks wonderful.

The soup looks tasty, coconut milk is a wonder! The Kenzoil looks good, too. It is good to support local businesses :) I'm good at finding reasons for things, too. But I'll admit it gets a little ridiculous sometimes (for my part, anyway), haha.

I hear ya'. Us Southern gals like warm weather. I am ready for Winter to go away as well. Though I do wish the boys had seen at least one snow day.

I totally had sourdough last night- and it was glorious!
and that kenzoil looks so yummy spread on the bread.

I am totally on board with "everything in moderation" (as long as it's vegan, of course)! I could never give up white flour products entirely, and I figure that as long as most of my carb intake comes from whole grains & wheat bread, the occasional sourdough or (my favorite) ciabatta isn't going to kill me!

That soup looks sooooo yummy. You'd die if you were in MN right now. I have no idea how many inches of snow we have, but it's up to my waist in our yard. GROSS. Hoping for spring SOON!

usually i'm a-okay with winter and actually enjoy the hell outta it, but this year i'm over it! i can take the cold, but i'm through with all this darn snow. the dirty mounds of snow that take forever to melt are looking so sad! :(

rock on with purchasing some local sourdough bread, Bianca. white bread every now and again is alright in my book, especially when it's local and oh-so yummy! Lauren's soup sounds gloriously good, too. mmmmmmm!

I love Vegan Yum Yum and that soup looks fabulous!!!

That so reminds me I have to order me some of that Kenzoil.

"This might look like any old black bean soup, but it's not. It is a Lauren Ulm recipe, after all."

I totally understand your hatred for the cold. It's snowed three times here in Alabama! That's not normal at all for the South.

I wish it would snow here! We haven't gotten anything since New Year's, and it's been in the 40s so most of the snow we had melted. Ski conditions suck, and the trees and brown grass are so ugly without snow on them. This winter IS whack. Stupid climate change.