Veggie Soup for the Soul

Let me explain. On Thursday, my neighbor Michelle called me at work to tell me that some mean realtor lady was in our yard saying that we (me and my 3 neighbors) had 30 days to find a new home. Apparently, the slumlord who owns my building, a 1920s-ish house split into four apartments, hasn't paid the bills in awhile and the house is in foreclosure.

This sucks! Not only do I have to move, but I have to leave some of the best neighbors I've ever had. I'm gonna miss Wes (the awesome house dad who cooks surprise dinners for us, waters everybody's plants, and cares for my pets when I leave town ... Wes is truly like family to me). 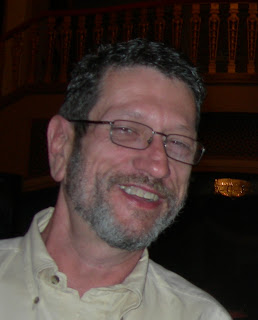 And I'll miss Michelle (the strong poet chick who has late night political discussions with me in the carport), and Kristen (the fashionable, pink-haired philosophy maven who has birthday parties for her cats).

Just last year, Wes and I were forced out of another apartment complex when it was sold to condo developers. We're tired of being shuffled around.

To ease my troubles, I turned to food of course. Not typical comfort food like ice cream, but Homemade Local Veggie Soup: 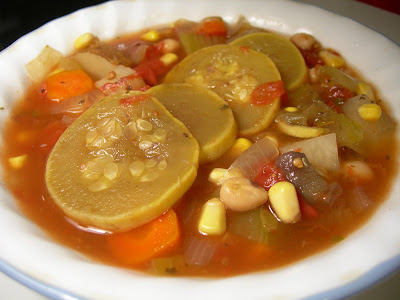 Last night, I boiled down six tomatoes from the farmer's market (after removing their skin) for about an hour. This morning, I poured the tomato base into a Crock Pot with 2 cups veggie stock, 2 summer squash, 1 cup fresh crowder peas, fresh corn sliced off the cob, 3 carrots, 2 celery stalks, an onion, 4 garlic cloves, 2 jalepenos, basil, oregano, seasoning salt, and some of this crazy-looking Japanese okra: 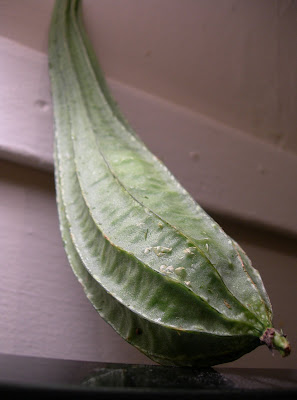 My Granny grows this stuff in her yard and it tastes (and looks) like a cross between eggplant and okra. You have to peel the skin off though because it's a little tough.

Though the soup, served with melty Teese toast, didn't solve my housing situation, it sure did taste good. And it was a great way to use up some summer bounty!
Posted by Bianca at 11:22 PM

Oh no! I just finished moving, and it was terrible, because moving is always terrible. I hope yours is as un-terrible as possible, though.

I'm really sorry you have to move against your wishes. I hope you find somewhere great to move to. Soup looks great!

Bianca, I can't express just how sorry I am that you have to move under those circumstances :0( Hang in there!!

On a brighter note, I love your meals :0)

That sucks you have to move. Slumlords are lame. We have a slumlord for our landlord as well. Ugh. Hopefully you will find a better place.

That is HORRIBLE about your place. I hope you all are able to find new homes without too much hassle, that really isn't cool.

Ugh, our crockpot broke last week - well, the lid to it to be more specific. You are giving me the idea to make up some veggie soup and freezing it for over winter. Now if I could just figure out how to shove more in my freezer....

I need a pressure canner now...

Moving is icky. I'm sorry you have to go through something so stressful... again! Hopefully you'll find a great place and get to stay as long as you'd like. :) That soup looks yummy! As for me and tofu... I have mixed feelings about the Fried Tofu from the Asian Market. It was interesting because the chili and lemongrass was mixed into the tofu and not just used as a marinate.... I liked the texture but I think the lemongrass will take some getting used to... of course the hubster who LOVES tofu didnt' like it...

a slumlord indeed! that sucks crap, Bianca! argh! i would be super frustrated, too. moving = no fun - and especially against your will and when you have such awesome neighbors!

your local veggie soup looks fresh, tasty, and awesome though! and that okra = crazy, indeed! i like it! teesy toast = mmmmmmmm!

I'm sorry you have to move away from a place you love so much and leave your awesome neighbors :(

I hope you are able to move somewhere with equally awesome neighbors!

Hey babe, I'm so sorry you have to move. I can't imagine all the stress you're going through! Keep your head up, and know that things will work out for the best! :)

Geez it sucks you have to move...guess this means you'll have to come up here to Asheville where there are vegan goods aplenty.

Wow! Your neighbors sound amazing! I'm so sorry you have to move. Good luck with everything. And I know the soup didn't fix all of your problems but it does look absolutely beautiful.

Your soup looks just the way I like it! Tomato brothy with lots of vegetables. Sorry about the upcoming move, really. That's such a hassle.

I'm so sorry you have to move; that is really terrible. :( I hope you find another set of wonderful neighbors in your next place!

soup does feel the soul! That looks so good.

I wish you lived here because I would love a neighbor like you! They way you describe them all sounds like you have a lot of affection for them. My neighbors just wave or nod occasionally. Good luck with the move. Moving is horrible. The soup looks great. That is a good idea for the tomatoes. I am running out of idea for the last of summers bounty.
Keep your chin up.

That's totally lame! I am sorry; I've never had to move against my will and I am sure it's no fun. Perhaps you will find an even better place to live through all this, who knows?

What a beautiful meal you made!

That stinks! Moving is SO stressful. I'm glad you comforted yourself with some super-healthy veg soup. It looks delicious. If you need a little vegan ice cream, though, to get you through, I'm sure we'll all understand. ;-)

Oh I hate moving. And I havn't moved in six years!! Hope you survive OK! Let us know!

That sucks! It's so hard when you really love your neighbors. I hope you find something cool, and quickly!

The soup looks delish... But I'm so sorry that they're making you move! I guess landlords don't get that mean reputation for nothing. Hey, if you want to cook me yummy meals, you are welcome to move in with me and I promise I will never make you move! :o)

I wish you didn't have to move. I like your place. Boo. Soup looks wonderful as always!

Oh no! I'm so sorry you're having to move, especially against your will. Landlords can be shady creatures sometimes. I hope you find another place at least somewhat as excellent as the one your'e leaving.

At least that soup looks super delicious? Those okras are crazy.

I hate moving, I think the worst part is looking at crappy apartment after crappy apartment, I wish you luck. Most apartments here don't allow pets, so that can make it really stressful too. We had to leave our cats with my parents for a few months a couple of times. But, thankfully, we now own our own house.