Isa Chandra Moskowitz is about as vegan-famous as vegan-famous can get. I mean, she (and partner in crime Terry Hope Romero) practically invented vegan-famous with the Post Punk Kitchen and a million or so amazing vegan cookbooks. They co-wrote Veganomicon, Vegan Cupcakes Take Over the World, Vegan Pie in the Sky, and Vegan Cookies Invade Your Cookie Jar. And on her own, Isa wrote Vegan with a Vengeance, Vegan Brunch, Appetite for Reduction, and Isa Does It.

I don't know about you, but all of the above are among the most used books on my cookbook shelf (okay, more like shelves ... nine to be exact). They're practically required reading for all vegans. Isa's books taught me how to make chickpea cutlets, tofu omelets, never-fail cupcakes, flaky pie crusts, and vegan matzoh balls that don't fall apart. Oh, and perfect pizza crust! The crust recipe in Vegan with a Vengeance is my go-to for homemade pizza.

I've had the pleasure of meeting Isa a number of times at vegan cons and vegfests. And I'd seen her demo (and sampled what she made) before. But since I'm hours away from Isa's Omaha restaurant Modern Love, I'd never eaten a full meal prepared by Isa. Until last night! I learned months ago that Isa would be doing a four-course meal and live demo at City Winery in Nashville (thanks Lesley!), and I scooped up tickets for myself, Pam, and Cassi immediately.

Yesterday, we made the 3 1/2-hour car trip to Nashville. We got there early enough for lunch at Wild Cow and a shopping trip to Trader Joe's and Whole Foods (because Nashville's WF store carries Field Roast burgers and ours doesn't). And then we headed downtown to City Winery for a little pre-gaming before dinner. 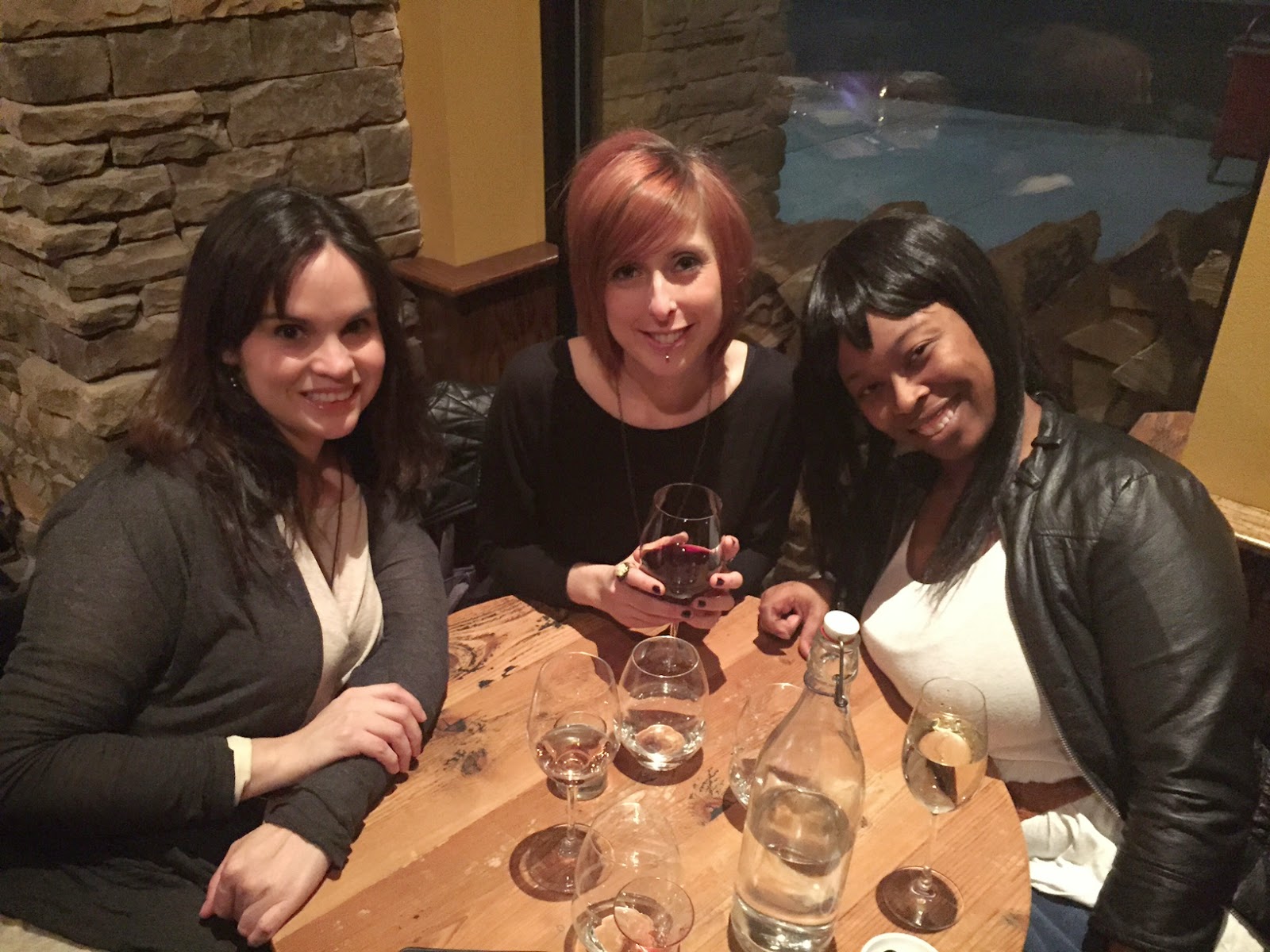 At 8 p.m., it was time for dinner! Each course was served with a wine pairing, and then Isa demonstrated how to make each dish. Here she is on stage in her Misfits tee (of course!) talking about grilling tofu. 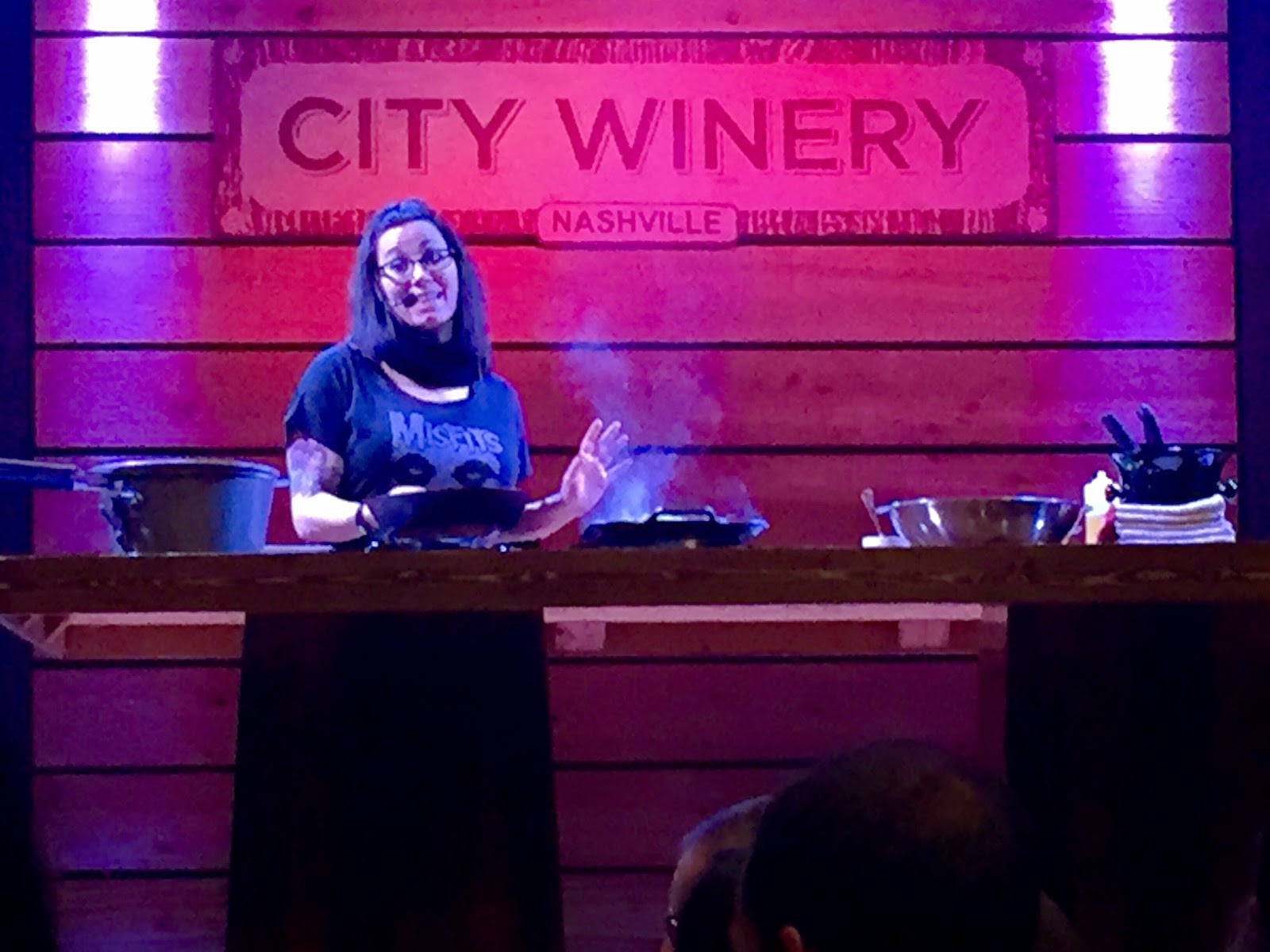 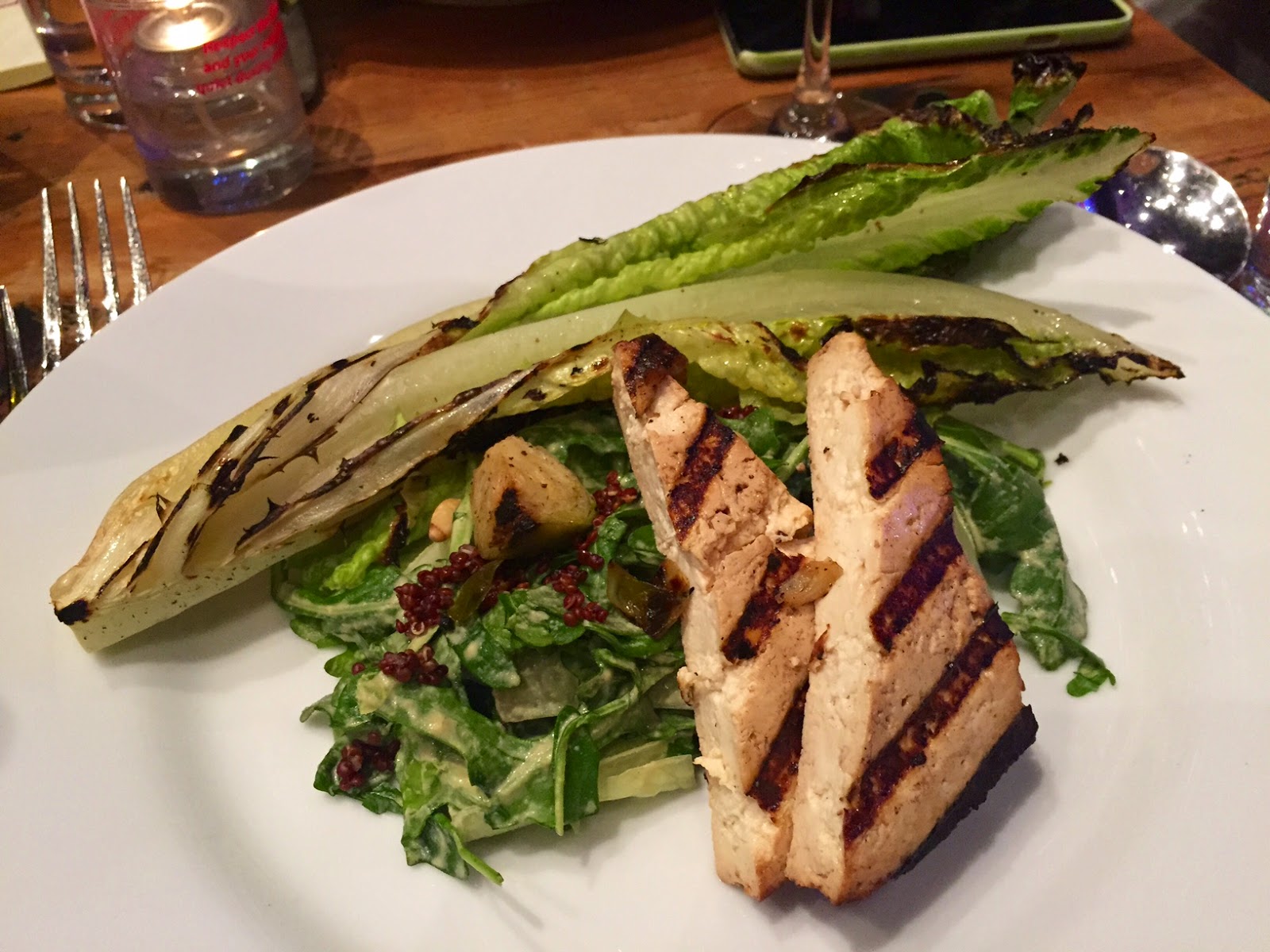 Okay, if you've been reading this blog for awhile, you know how I feel about arugala. Not a fan. But dude, I don't know what Isa (and her band of chef helpers) did with this arugala, but it was actually tasty. Like really tasty. I guess I just have to have it paired with the right flavors. It worked here. But the stars of this dish were the smoky grilled tofu and the grilled romaine. I mean, grilled romaine!! I've never even heard of such a thing. I'm definitely gonna start grilling romaine at home.

The second course was a Tamale with Lentil Chorizo, Mole Rojo, and Guacamole. 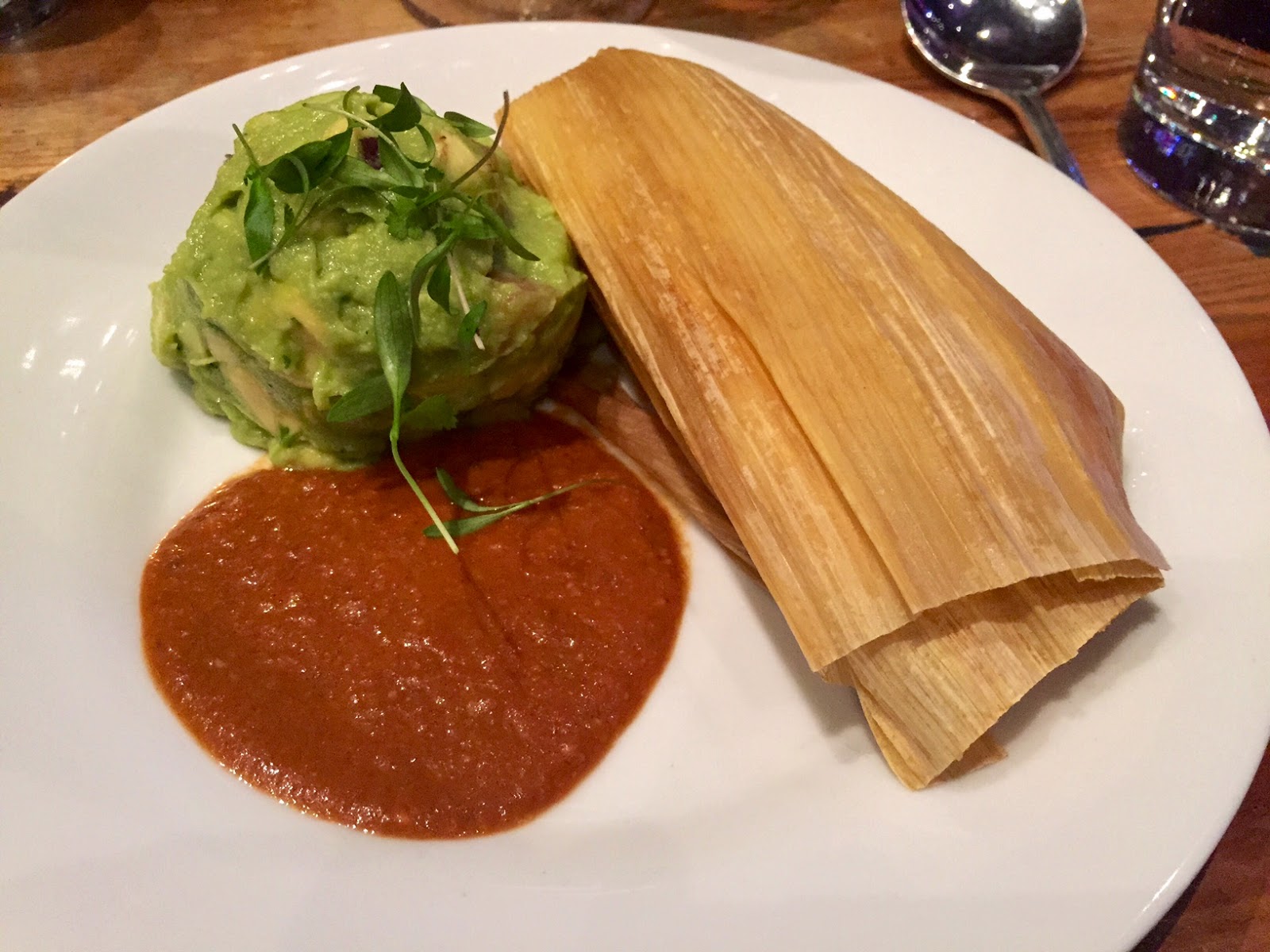 Definitely my fave course of the night! I love tamales, and if there's a tamale on my plate, I can guarantee it'll be my favorite thing. But this tamale was extra special. It was stuffed with lentil chorizo and served with a smoky guacamole and some of the best mole sauce I've ever tasted.

The third course was Chickpeas & Biscuits, a creamy chickpea stew with rosemary biscuits. 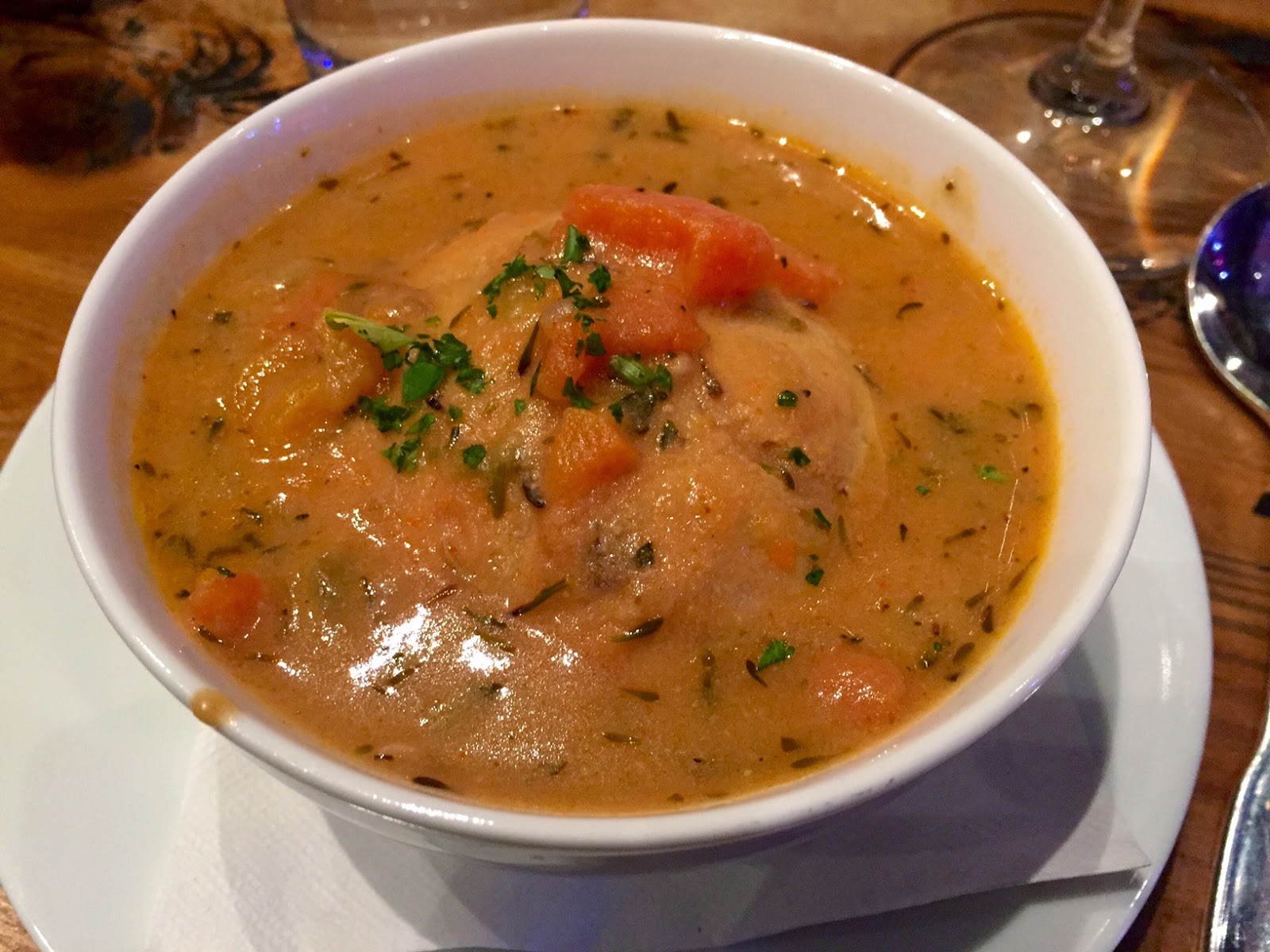 Another winner. Drop a biscuit in some stew, and I'm in love. The carrots added a nice sweetness, and the cashew cream made it thick and comforting. And the biscuit had a fluffy but firm texture that managed to hold up to the stew without getting too soggy.

Finally, it was time for dessert — Chocolate Mousse Cupcakes with Coconut Whipped Cream. 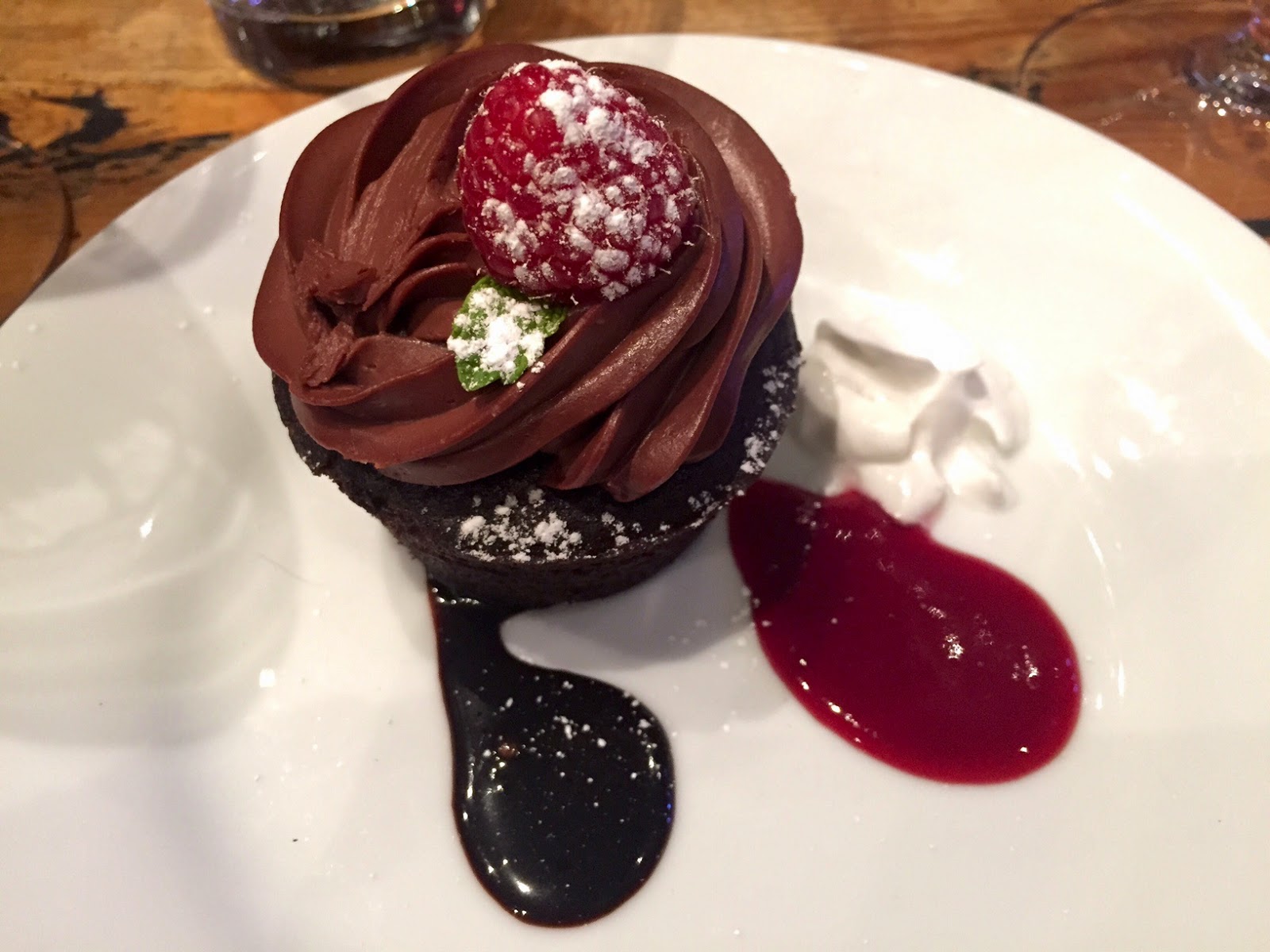 A cupcake made by the cupcake queen herself! And since Isa doesn't do artificial anything anymore, she now uses tofu mousse atop cupcakes instead of shortening-based frosting. The result was fluffy and light without feeling fatty. The chocolately cake paired perfectly with the whipped coconut cream, the tangy raspberry coulis, and the ganache. And the wine pairing here — a port — was practically made for this dish. Each bite and sip together were pure bliss.

My only complaint —and it nothing to do with Isa! — would be that City Winery was a little skimpy on the wine servings with each pairing. I'd say we got about two ounces per course. Maybe that's how all wine pairing dinners go, but I was expecting full glasses with each course. Am I just a lush? Probably. Anyway, Pam and I had to go to the bar and order extra full glasses of wine mid-way through dinner.

We left with our bellies full (I had to roll my leggings down to my waist so my tummy could bulge out a little) and made our way home. I wish we could have spent the night, but Pam and I had to work today. We didn't get back to Memphis until 2:30 a.m., and I had to get up for work at 7 a.m. But the lack of sleep was totally worth it!
Posted by Bianca at 6:19 PM

I love it! I saw her at City Winery the night before, but it's cool to see how other cities pulled it off.
The city winery servers were kind of jerks to my friend and I too (not that you said they are, only that the servings were skimpy) and we ordered an extra beer each as well.
That Caesar salad was the best thing I've eaten in a while.

Wow, that all looks incredible! I don't own any of her cookbooks but I think I'll be making a trip to the bookstore this weekend!

I totally saw you there and nearly introduced myself but didn't want to seem to stalker-y. Hi!!

You are so rad to grab tickets for your friends, look like it was totally worth the drive and sleep dep. Be still my beating heart - Isa in a Misfits tee!

Sounds like a real nice evening. I would love to meet her, too. She's so great - but I love your book, too. (:
Greetings from Germany.
Lena

I went to the one in NYC - such a fun night, right? Your pictures look much better though, the lighting must've been brighter in Nashville. Yum, those tamales were fantastic! Glad you had a great time :)

We were there too! We were up in the balcony. Awesome show.

We were there too! We were up in the balcony. Awesome show.