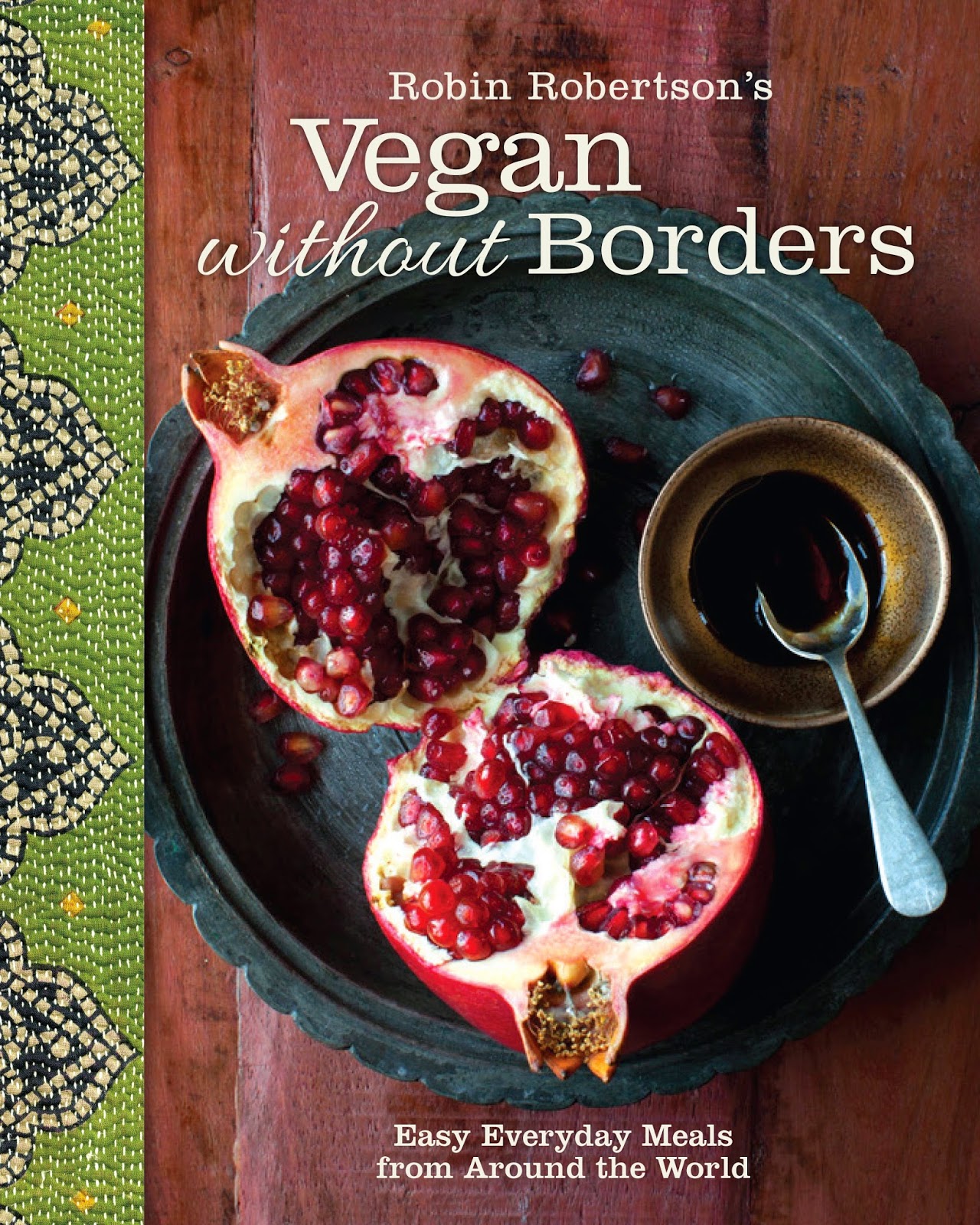 Oh, Robin Robertson! What a cookbook force you are!

One of my first vegan cookbooks, Vegan Planet, was an epic tome by Robin, and it has 400 recipes! And yet, she has still managed to put out book after book after book with hundreds more recipes. Hell, in the past few months, I've received three Robin books to review. I don't know how she does it, but I'm glad she does.

Her latest work, Vegan Without Borders, is a full-color collection of recipes from across the globe. There are chapters on Europe, the Americas, Africa, the Middle East, India, and Asia. And many of those are broken further down by country — Italy, France, Spain, the U.S., China, Thailand, Vietnam, etc. I can't afford to travel outside of the U.S., but I feel like this book can at least help me pretend. The best part about traveling is the eating part anyway.

After much deliberation, I finally settled on Africa and Robin's recipe for Vegetable Tagine. 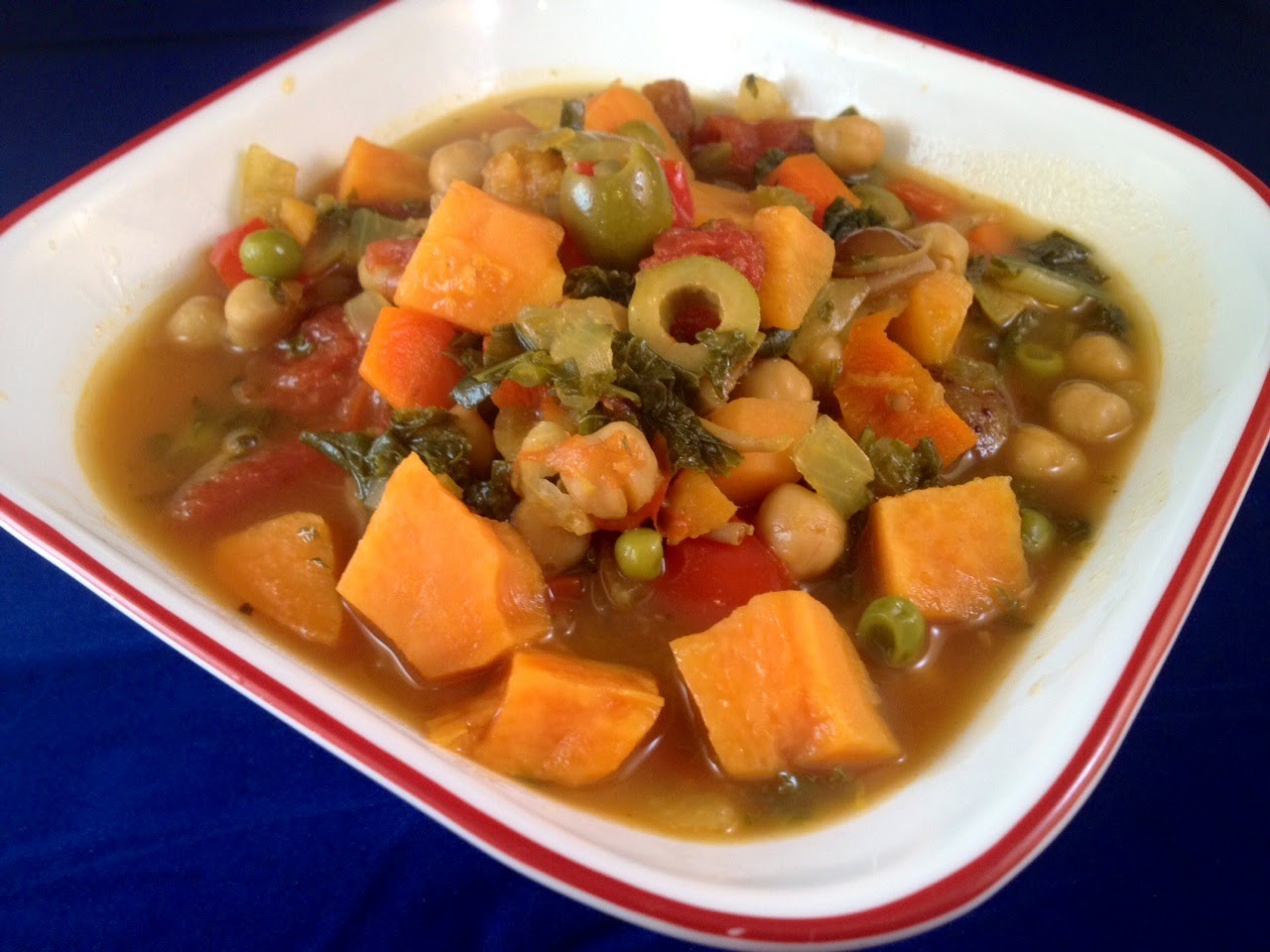 Isn't it beautiful? Tagine is a traditional Moroccan stew made in a clay pot. But this recipe requires no special pot. It's loaded with sweet potatoes, chickpeas, kale, bell pepper, onion, carrot, tomatoes, and (my personal fave) green olives. There's a touch of sweetness from the dried dates and apricots, and there's a ton of flavor, thanks to ginger, coriander, cumin, turmeric, smoked paprika, and cayenne.

I also attempted to make Robin's recipe for Injera, that awesome African spongy bread. It's notoriously difficult to make. The teff flour mixture has to ferment for several days. I'd always been too intimidated to even try making it, but Robin's recipe looked simple enough. Sadly, I believe either my yeast had gone bad or my hot water wasn't hot enough. And my injera was a fail. I don't blame the recipe though. There's some magic to injera-making, and I just didn't have it.

But the tagine came together in a breeze. And Robin's publisher has generously allowed me to reprint her recipe here. But first, a giveaway! Leave a comment at the end of this post letting me know which country's cuisine you favor the most. Be sure and leave an email address so I can contact you if you win. I'll close out the giveaway on Tuesday night (November 11th). Good luck!

Fragrant spices and dried fruits are key to this Moroccan stew traditionally made in a pot by the same name. Tagine pots are typically made of clay, often painted or glazed. It has a flat circular base and a large cone-shaped cover that is designed to circulate the condensation. A Dutch oven or other large covered pot may be used instead. Serve the tagine over couscous or rice accompanied by a smal bowl of Harissa Sauce for those who like it spicy hot.

Heat the oil or water in a large pot over medium heat. Add the onion, carrot, sweet potato, bell pepper, and garlic. Cover and cook until softened, about 5 minutes. Stir in the ginger, coriander, cumin, turmeric, paprika, salt, and cayenne. Cook, stirring, for 30 seconds to bring out the flavors. Add the kale, chickpeas, tomatoes and their juice, and broth. Bring to a boil, then decrease the heat to low, cover, and simmer for 30 minutes.

While the tagine is cooking, soak the apricots for 30 minutes in hot water. Drain, cut in half, and add to the pot, along with the dates, peas, olives, and lemon zest. Cook, uncovered, for 15 minutes, or until the vegetables are tender. Stir in the lemon juice and cilantro, then taste and adjust the seasonings, if needed.

From Robin Robertson's Vegan Without Borders: Easy Everyday Meals from Around the World,
by Robin Robertson/Andrews McMeel Publishing, LLC.
Posted by Bianca at 10:21 PM

I loooove Indian food! Luckily a lot of their meals are plant based, the spice blends they use are amazing.

Hoping this contest is open to Canadians, Raia_k@hotmail.com

I love Indian and Korean a lot. But there is something about Ethiopian and their ingenious way with spices that I could never tire of. We have a grand eatery in the Detroit area that I could just park myself at and never leave. But it's a long drive. I need to play with some food ideas I think.

Indian food! Would love more recipes for it!

I love Chinese food but don't really know how to make anything other than fake fried rice... joy.clark@gmail.com

Anything Asian, but probably Thai food is my ultimate crush if I was pushed, specifically the southern thai food. fingers crossed! (sarah.ogorman@gmail.com)

Right now, my favorite is Vietnamese food. The cuisine at Vietnam already heavily emphasizes vegetables and fresh ingredients so it's very easy for a vegan to enjoy!

I love Indian food, but often find the long list of ingredients daunting. Mexican food is easy to make and delicious!
veganinthebahamas@gmail.com

Middle Eastern cuisine is definitely one of my favorites.

Having traveled there and tasted it first-hand, Ethiopian cuisine is by far my favorite.

That's such a hard decision to make... Indian, Thai and authentic chinese have to be at the top of the list.
Thanks so much!
c-chamm@start.ca

Definitely Mexican but I love Thai flavors too!

Difficult to decide but Indian food is probably my favorite.

I get tired of most cuisines after a while, but I can always, without fail, find an appetite for Mexican!!

Indian food! I could eat it every single day. (greenvegan4life@gmail.com)

I prefer Indian food the most - but that's probably because I eat it the least! I do love Chinese and Japanese as well....but probably cook Italian or Mexican the most :)

This would be amazing to win!!Since going vegan its a toss up between Indian and Chinese, I'd love to explore others!!

Japanese! I just learned how to make sushi and am inspired to learn more difficult things too. I'd rather make it myself (with proper guidance of course) than risk fish contamination in a restaurant! jackydlt at gmail dot com

Mexican always hits the spot for me.

I love Mediterranean and Middle Eastern food. I also love Robin Robertson's books! Thanks for the chance to win!

I'm probably the only vegan ever that doesn't fancy indian food! Or maybe I just need a good recipe to change my ways. Hmmm....Vegan Without Borders, perhaps?!

Middle Eastern food is the best!

Given my Italian upbringing i can't live without Italian food! I really appreciate middle eastern food and some comforting eastern european food.

I don't know if the giveaway is open to Canadian citizen too, but I'll leave my comment in case...!! Hope so :)

First, thanks for this giveaway. This cookbook seems really interesting. I like travelling throughout world wide cuisine. It is difficult to choose only one cuisine, but I would say, Asian, specifically Chinese cuisine.

I adore Ethiopian cuisine, though sadly there are no restaurants locally here in my small city. So a cookbook would be lovely! (patienceA AT gmail DOT com )

Indian food and Mexican food is a close second! msvandy@gmail.com

Thai food and Mexican are my favorites!

Mexican is one of the favorites in our home. =)

Living in California, I tend to favor Mexican Cuisine. I also like Thai.
Digicats {at} Sbcglobal {dot} Net

I love good African food. Can't wait to make some!

I love Indian food; and then Spanish for the days I want something different:-)

At the moment, my favorite cuisine is Ethiopian. I can eat so much Ethiopian food but I've never tried cooking it myself. I should get on that.

I probably eat Indian food the most but I'm dying to try Ethiopian!

I love anything new and different! Mexican, Italian, Indian, Thai. I love fresh ingredients and tomatoes! And spices!
Yeskeya@aol.com

South American and Mexican would have to be my top choices. I love the way the different flavors blend into something wonderful. che_57@hotmail.com

Ethnic food is delicious, and both East and West Indian are favourites of mine. Congrats on a beautiful cookbook Robin ~ you are a force to be reckoned with! Hope I win another of your lovely books.

What a great blog! Asian is great. So is Indian. And African. I can't pick just one!

That looks delicious! I'm not really much for ethnic cooking, mostly because I don't know any recipes! This looks like a great cookbook to remedy that problem. Thanks for the chance. lockesdaydreams@aol.com

Ethiopian food please! Perhaps because it's nearly impossible to find in South Florida - I relentlessly seek it out when I'm traveling. I also have big love for Indian and North African flavors.
ddk1509@gmail.com

I love all cuisines, but, if I have to pick only one, it would be Italian!
elaine.trautwein@gmail.com

I love Indian but enjoy most cuisines.

Mexican is my favorite but Indian isn't far behind!

Oh, I love Ethiopian and Indian, but I'm not picky, as long as it's vegan!

Mexican and Italian are tied for first! cm2003_jt@hotmail.com

what a supberb looking book! I'm from Australia so possibly not eligible for the comp but I wanted to say how awesome that recipe looks.

Indian food all the way! I love the various spice blends used in so many of the dishes. :) (lynxette10@yahoo.com)

I enjoy italian food as well as Thai food... they are so different it's hard to choose a favorite!